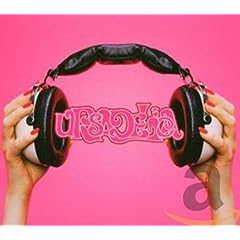 If you look back in time at Ursula 1000 album covers , you'll see a host of retro femme fatales in the action. The new one, Ursadelica, reveals just her hands, but the meat sandwiched between the headphones she's holding is fetching just the same. Turn it over and the hand with the plug literally demands an outlet.

This intelligent dancefloor electronic music makes you want to crank the stereo and twitch to each new groove, twisting happily until the end of the world. You might not make it that far, but that's not the point. Upbeat is upbeat; don't question the rest. Feel good music is good for the soul, as they say.

Ursula 1000, otherwise known in the real world as one Alex Gimeno, is now on his fourth full-length release for ESL. It's a mix disc, like All Systems a Go Go from four years ago, which by the way is his only one to feature a non-femme cover (that is, the artist himself, in all his mad scientist glory). Twenty tracks by as many artists inhabit a loosely defined groove zone that ranges from down home New Orleans funk (The Bees' "Chicken Payback") to dizzy, cosmopolitan samba (Dr. Rubberfunk's "Bossa for the Devil") and percolating salsa jazz (Tata Vasquez's "Suite Guaracho Pt.2," remixed by Beatfanatic), with various international stops in between.

Carlos Jean begs you to put your hands together and clap for the new generation on "Mr. Dabada"; Lemon's retro, beat-centric "Won't You Join Me For A Drink?" segues seamlessly into the Dutch trio Kraak en Smaak's "One of These Days," with its feminine lyrics of love spurned and a taste of some four-to-the-floor action. Barring a few predictable grabs (the Torpedo Boyz get right to the point and bluntly insist, "Gimme a beat! Gimme a bass line!"), the mix is varied enough to sustain interest without becoming distracting. None of these cuts overstay their welcome, in any case.

This new entry into the ESL catalog reflects the label's fascination with loose funk, border-crossing rhythms, colorful samples, and the inevitable hook. It makes a fine dancefloor companion to the head honchos' recent mix of their own, The Outernational Sound . After many spins Ursadelica remains taut, fresh, and fun.