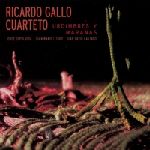 Urdimbres Y Maranas (literally, fabric and tangles) is the second release by the Colombian pianist Ricardo Gallo and his quartet, the first being Los Cerros Testigos (Chonta, 2006).

The aim of their music is the same: to blend traditional Colombian music, especially its rhythms, with the freedom of the American jazz aesthetic. The former album was full of energy and high spirits with the tracks gloriously exposing the clash of the two differing musical mindsets.

The first album produced a kind of welding of styles, but this release creates a real alloy. However, the tracks are seemingly purposefully ordered to bring about a gradual transition from the mostly traditional to the mostly jazz.

What this means is that the musical elements of the opening track, "Tablitas," reinforce each other to place the piece solidly in the folk sphere with little to displace it. The harmony oscillates between two chords and the rhythm maintains a simple pattern. Over this, Gallo's piano (and Juan Manuel Toro's bass) phrases fall in lockstep with harmonic movement, producing a feeling of simplicity with rare notes or chords that move outside the boundaries set up. From this track, one might think that Gallo has regressed, or reassessed his musical goals.

However, that feeling will be proven wrong as the tracks gradually add in the freedom that one takes for granted in jazz, with "Artifico" and "Remolino" teetering on the fulcrum with a half-and-half mix. From there, "Ventanas," with its odd length repeated phrase on Fender Rhodes and less obvious percussion moves the listener into jazz land.

"El Trueque" begins with a polyrhythm produced by a repeated note in the piano played against the drums and percussion, but then becomes a true jazz romp with Colombian undertones and is very exciting. The next and longest track, "Contradicciones De Una Serpiente Inversa," written by Toro, is a very free exploration of rhythm, using many techniques that sound experimental and we are hearing free Colombian jazz, if you will.

The last track, "Distritofobia," completes the journey as the music now is full of dissonance, shifts of rhythm, interplay between the piano and the percussion and very heavy bass line. This is now fully Colombian jazz, the real alloy, and it is a joyous thing to hear.

Gallo really knows what he is about and has clearly worked hard to create something new while not forgetting his past or his present. His music further confirms the definition of jazz as an aesthetic, a musical viewpoint, an attitude, and he and his band are to be watched.