By MARK CORROTO
December 5, 2014
Sign in to view read count 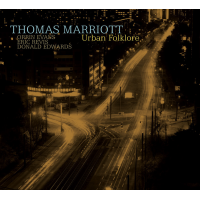 Nothing has hit quite as hard as recent music from the trio of pianist Orrin Evans, bassist Eric Revis and Drummer Donald Edwards. The three musicians seek out (or probably are sought by) collaborators of equal weight and energy. It is not surprising that this recording of nine compositions, led by trumpeter and Seattle native Thomas Marriott, is a knockout from the opening number.

Urban Folklore is Marriott's ninth as leader, and follows Dialogue (Origin Records, 2012) a live date in which Evans was a guest artist.

"Apophis" whirls with the trumpeter's gentle yet passionate tone, drawing the trio into the mix, only to open into a blistering post-bop run. Marriott draws upon the shared language the three exhibited on Evans' trio disc ..."It was beauty" (Criss Cross, 2013) and also Edwards Evolution Of An Influenced Mind (Criss Cross, 2014), which included saxophonist Walter Smith III and guitarist David Gilmore.

Fans of Evans' Captain Black and Tarbaby bands will have much to celebrate here. Marriott stands toe-to-toe on the burners, including the funk-laid foundation of "The Tale Of Debauchery," a Freddie Hubbard mid-sixties inspired "Mo-Joe," and the ever-so-hip bouncing of "Living On The Minimum." He also delivers on the tender ballad "What Emptiness Can Do," with a benevolent trumpet sound that could easily be mistaken for a flugelhorn. Marriott's trumpet pulls from both the classic Blue Note hard bop sound and the modern textures heard from Dave Douglas and Ron Miles. With Urban Folklore the West Coast-meets-East Coast sound is the new cool.

Apophis; The Tale Of Debauchery; Room 547; Mo-Joe; What Emptiness Can Do; Locked Up (Theme from "The Shot Caller); Living On The Minimum; I’m Vibing You; Washington Generals.