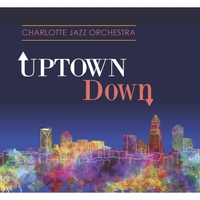 Uptown Down is the second album by the Charlotte (NC) Jazz Orchestra, a credibly proficient ensemble for a city that size. Unlike its earlier, in-house endeavor, this one is intended for public consumption; also unlike its sequestered debut, the CJO has chosen this time to intersperse its half-dozen instrumentals with vocals by Renee Ebalarosa. Is that a good thing? The answer depends largely on one's fondness for big-band singers. Let's simply say that some listeners would prefer to hear an orchestra unhampered by songbirds, no matter how earnest, and let it go at that.

As for the charts, saxophonist John Alexander and pianist Alan Kaufman do most of the heavy lifting. Each contributed two original compositions, while Alexander arranged seven of the album's eleven numbers, Kaufman three and Mike Carubia one (Horace Silver's light-hearted "Song for My Father"). Ebalarosa sings on the charming standards "Besame Mucho" and "At Last" (lending the latter a bluesy veneer), Billy Strayhorn's well-traveled "'A' Train" and a pair of somewhat more indifferent entries, "What You Won't Do for Love" and "Let's Stay Together." The session opens with Alexander's jaunty "Rickety Split" and includes his shuffling "Uptown Down" as well as Kaufman's burnished "Moanin' Glory" (which calls to mind the sort of film score Henry Mancini might have written) and Latin-infused "Manuel (that's how it's spelled on the CD's jacket) Labor." The orchestra faces perhaps its sternest test on Zequinha Abreu's animated "Tico Tico" and passes, albeit without honors.

Alexander (tenor sax, flute on "Besame Mucho") and Kaufman are among the orchestra's soloists, each of whom is efficient if less than singular. The others are trumpeter Doug Burns, alto / soprano Jack Murray, tenor Jeff Tippett, trombonist Mark Richards, guitarist Troy Conn, percussionist Jim Brock and drummer Bill Stowe. Stowe, Kaufman, Conn and bassist Sean Tarleton keep the rhythm flowing with a minimum of unease. For those who aren't bothered by the frequent intrusions of a band singer, a fairly respectable narrative by a fairly respectable jazz orchestra.

Rickety Split; What You Won’t Do for Love; Moanin’ Glory; Let’s Stay Together; Manuel Labor; Take the “A” Train; Uptown Down; Besame Mucho; Song for My Father; At Last; Tico Tico.