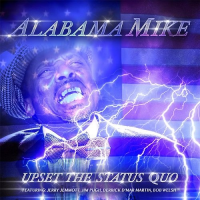 There is a famous song about blessing the child that's got his own. It was written at a time when making it independently was quite an achievement, though it can still be applied to musicians today. Alabama Mike (Michael Benjamin) was a truck driver that by luck and fate, in 1999, became a soul singer who's got the blues. He started his own label Jukehouse Records, in 2009, which has released three acclaimed records. His latest offering, Upset The Status Quo is the culmination of a life that started, as many do, in the church choir, back home in Talladega, Alabama, though he now calls the Bay Area home.

Alabama Mike wisely went to Kid Anderson's Greaseland Records in San Jose, for the recording and production of the record, as this studio has garnered a reputation as the place to go on the West Coast for the authentic soul and blues sound. Mike is a throwback to the singers that made this music famous, possessing an emotional tenor voice that can pack a punch or mend a broken heart. His original lyrics deal with life in the modern world, as this is blues for a new time. The title track is reminiscent of the great records by Buddy Guy and Junior Wells, with harmonica man Aki Kumar playing the accurate phrases. "Identity Theft," casts him in an upbeat soul mood, where he is right at home. Veteran tenor man Bernard Anderson, legendary bassist Jerry Jemmott, stellar organist Jim Pugh, and female backing vocals add the legitimate touches of a retro R&B revue on this song, as well as others.

The band takes the fast lane down south to "Mississippi," praising the wild life, and revisits his Alabama roots in "Can't Stay Here Long," a marvelous ballad about going back, but not for long. A good lyricist can find humor in the strangest situations, as Mike does on "Restraining Order," a self-explained problem from a man's point of view. "SSI," (Supplemental Security Income) is a social commentary on how having a little extra money can make a big difference. These numbers, though lighthearted, come with tight musical backing, with no room to spare. The late great Little Johnny Taylor is covered with "Somewhere Down the Line," where Mike delivers one of those classic tunes that separates the men from the boys.

There has been an almost mythical aura surrounding soul singers, and their church choir connections. It has been deemed a rite of passage for most of the great vocalists and Alabama Mike is certainly no exception, the hymns of his childhood resonating inside him. "God Is With You (Benediction) was chosen as the closing track for obvious reasons. He sings this like his life depends on it, like a man blessed to have his own.

Upset the Status Quo; Identity Theft; Mississippi; Think; Can’t Stay Here Long; Fight For Your Love; Restraining Order; Rock Me In Your Arms; SSI Blues; Somewhere Down The Line; God Is With You (Benediction).