By PAUL NASER
July 11, 2018
Sign in to view read count
Track review of "Fake It On Facebook" 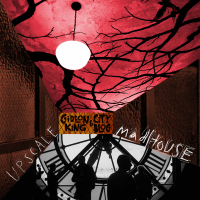 The single "Fake It On Facebook" from Gideon King's forthcoming release, Upscale Madhouse is the ideal ambassador for the rest of the album. It encapsulates all the evolutions his writing has gone through since his last release, City Blog, while it showcases his unique musical and lyrical style.

In addition to King's preferred style of organic, live performed guitar and keyboards, "Fake It On Facebook" features in studio production techniques which create added depth to the track. This is in contrast to his previous recordings which featured live instruments first and foremost. Here, ear-catching panning and unique sounds and textures introduce the opening solo section, where guitar and piano stretch out before the story begins.

As on the rest of the record, the lyrics of the single are excruciatingly topical while remaining aloof. There is no condemnation here, just evocative musings and humorous observations, like "I may be a dog, but he's a hound," or "You're 21 and he's 63, sweetheart it don't look good on paper." The chorus, which contains lyrics like "gotta make it real in somebody else's eyes," pokes fun at many people's tendency to present a gilded image of themselves on social media.

"Fake It On Facebook" is solid musically and lyrically and seems to suggest good things to come with the record's release in early August. Fans of Steely Dan, Stevie Wonder and good songwriting definitely have something to look forward to.