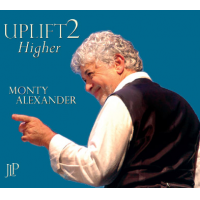 This blazing CD is the official follow-up to the splendid Uplift, which in 2011 was one of the first releases from John Lee's fledgling label, Jazz Legacy Productions. Blending Alexander's past and present compadres—referred to here as "two timeless trios"—Higher features seven tracks with the peerless John Clayton on bass and Jeff Hamilton on drums, and four with the excellent J.J. Shakur and Frits Landesbergen in those respective roles.

As with every other Alexander CD—about 70 to date—this one is a swingfest that's guaranteed to buoy the mood and spirit. It begins with rousing arrangements of "The Battle Hymn of the Republic" and "When the Saints Go Marching In" that segue into the laid-back cool of "I Love You Madly." Other highlights of this journey include an exuberant take on the classic "St Thomas" (unrecognizable from its exciting opener), the electrifying Hamilton solos on " Saints" and "Montevideo," and a new version of Ahmad Jamal's "Night Mist Blues," the song that famously opened his desert-island disk, Montreux Alexander (1976) with Clayton and Hamilton. Here, that trio takes all the cliché out of "You are My Sunshine," replacing it with humor and surprise. The action slows down just once, for "Close Enough for Love"—and even that ballad has an infectious pulse that ends up with a Latin feel.

The closer is a beautiful Alexander original, "Got to Go." As it seamlessly morphs from thoughtful ballad into lilting island mode, it provides a good demonstration of Alexander's signature talent for shifting dynamics. And while Alexander's music is always spontaneous, it's clearly headed somewhere; happily, there's none of the pretentious rambling that's cultivated in other jazz circles today. Instead, and as always, Alexander's playing is refreshing and distinctive, backed by rhythm sections that provide the ideal mutual support and inspiration.

Battle Hymn; When the Saints Go Marching; I Love You Madly; You Are My Sunshine; St. Thomas; Night Mist Blues; Montevideo; What a Friend; Close Enough for Love; Got to Go.