Rich Johnson: Up the Turret Mil 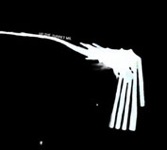 Trumpeter Rich Johnson might be said to be engaging with the present; in a way, that's true of so few of his contemporaries. He produces music that's steeped in the culture of sampling, and similar examples of magpie-like curiosity. At the same time, he fashions music that is as striking as anything out there. This is an achievement that might be modest, especially in these days of seemingly diminishing musical returns. But Up the Turret Mil still bodes well for the future.

On the happiest of notes, Johnson's music also scratches away at the surface of various muzaks. The joy of his subversion is that of an individual let loose in some place so purged of potential pastimes that he's faced with no other option. "The Loves of Zero" hints, in its muted trumpet lines, at Miles Davis caught in a soundscape of someone else's fashioning. The unnerving antisepticism of Chicago indie-rock band Town and Country, along with the singularity of Erik Satie's works for piano, are at the fore on "Harvester." The resulting music sounds like that of an individual who is relatively isolated from mainstream society, yet absolutely besotted with the few elements he knows of it.

Small sounds serve a purpose in Johnson's world. "Shoreline Frequency," at least in part, is the worst of a sensibility for which no sound is too trivial, even while the piece has nothing in the way of harmonic evolution. Those small sounds, on the intermittent occasions when they merge into something that passes for a motif, form the basis for what development there is. However, it's not to the extent that tropes—such as those old standbys of beginning, middle and end—have any significant role to play.

"After a Tectonic Melt Purr" is music purged of every excess, to the point at which it's astringent. Drums lend impetus, as they inevitably do, but even this is broken; some kind of concession to the world of the beat, even while that very thing is surplus to requirements. By its very nature, the beat is associated with a world for which Johnson appears to have little time, but the escapism this implies is not a cornerstone of the music.

Instead, this is the work of a sensibility absorbed by the world, but only at the point at which it breaks down; when technology becomes not so much a servant of humanity, but rather a law unto itself. Up the Turret Mil is not bounded by the physical, by dint of the fact that it's not a product of it.