Art Hodes: Up In Volly's Room

By JACK HUNTLEY
August 1, 2011
Sign in to view read count 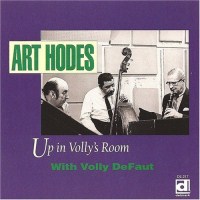 Throughout his long career in and around the music industry, Art Hodes was a dedicated lover of what is now termed traditional jazz but was then the current, dynamic confluence of blues, ragtime and Dixieland influences. Coming of age in Chicago's vibrant 1920s music scene, Hodes digested the sounds of transplanted New Orleans musicians such as Louis Armstrong, King Oliver, and Jimmie Noone. The music made a deep impression on Hodes, who became an accomplished pianist, recorded many respected albums, hosted a WNYC radio show, wrote for magazines, and ran his own record label. All of that insight and experience oozes from every track on this superb reissue of Up In Volly's Room, a disc compiled from sessions originally recorded in 1972 when Hodes was in his late sixties, but still creating dynamic music in the style he spent his life promoting.

The opening two tracks are duets with bassist Truck Parham, and both accentuate Hodes' blues-tinged harmonic language. The first is a slow take on the usually upbeat "St. Louis Blues" that shows off Hodes' easygoing and highly syncopated piano chops. The second, "You Gotta Gimme Some," is a more swinging example of his distinctive, striding left hand coupled with a lilting, melodic right hand. But the main attraction on this album is the give and take between Hodes and the undervalued but highly-able veteran clarinetist, Volly DeFaut (whose own claim to fame was recording with Jelly Roll Morton in the 1920s). Throughout the session, DeFaut demonstrates an unhurried pace even on such romps as "Struttin' With Some Barbecue," where DeFaut parses his lines with a breath of anticipation that leaves room to appreciate Hodes' splendid comping.

The most dominant influence on Up In Volly's Room is the spirit of early Louis Armstrong. Although not matching Armstrong's power, these musicians find a lifetime of creativity in his musical language. Hodes' melancholic medley of two Armstrong classics, "Do You Know What It Means To Miss New Orleans" and "Sleepy Time Down South" is tenderly realized, but the influence extends throughout track after track. Most notably, Hodes, DeFaut, and the other musicians (no spring chickens among them) exude a real energy that equals any music that was being played at the time these sessions were recorded. For a musical form many considered passé, Up In Volly's Room was alive with vibrant creativity.