Atsuko Hashimoto: Until The Sun Comes Up

By EDWARD BLANCO
September 15, 2011
Sign in to view read count 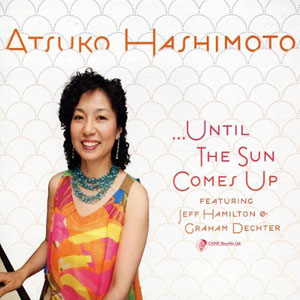 Atsuko Hashimoto rides the Hammond B-3 organ through a selection of familiar standards, borrowing songs from The Great American Songbook on Until The Sun Comes Up, the Japanese organist's sixth album as leader. The recording is also her third project with Grammy Award-winning drummer Jeff Hamilton, following Time After Time (CDBY, 2008) and Introducing Atsuko Hashimoto (Azica Records, 2008). Guitarist Graham Dechter, a regular member of the renowned Clayton/Hamilton Jazz Orchestra, rounds out the trio.

This particular group was assembled for the Friends of Frank Demeiro Festival in Seattle, for a March 2010 date. Hamilton has been enthralled with Hashimoto ever since he first heard her in Osaka, Japan (where she was born), while on tour with the Oscar Peterson Quartet. Except for a couple of pieces, Hashimoto provides all of the arrangements and storms through the eleven-song repertoire in aggressive style.

The classically-trained organist swings mightily on this session, leaving Dechter and Hamilton in the dust on "All Or Nothing At All," despite their own strong solos. Hashimoto demonstrates her affinity for the blues in a dedication to Kazuma Naka on "Blues For Naka," as well as on "Soul Station"—playing off Dechter, while the drummer delivers teasing beats. Cole Porter's "So In Love" takes on a fresh new face, moving to a much faster driven by Hashimoto's racing fingers. Likewise, the subdued "Moon River" is transformed into an upbeat swinging piece not normally associated with this Henry Mancini classic.

Hashimoto's swinging statements continue on "Cherry" and "Your's Is My Heart Alone" and, with the exception of the softer, laidback "The Good Life," culminates on the session finale "Hallelujah, I Love Her So." With superb contributions from both Hamilton and Dechter, Hashimoto scores another winner on Until The Sun Comes Up, lighting up some old worn-out standards with rays of sunshine.

All Or Nothing At All; Soul Station; So In Love; Moon River; What A Wonderful World; Blues For Naka; You Are My Sunshine; Cherry; Your's Is My Heart Alone; The Good Life; Hallelujah, I Love Her So;