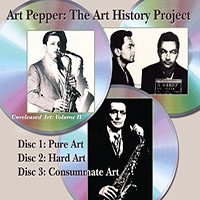 In her liner notes to Volume IV of the Art History Project, Art Pepper's widow describes him as a self-hating, alcoholic sex addict who turned to heroin in order to suppress these tendencies. Second only to Charlie Parker in the DownBeat polls of the day, nobody played alto saxophone as smooth and cool as Art Pepper. Unreleased Art, a three-disc set comprised of two-thirds never-before released material, traces Pepper's life in music from his golden era in the '50s through his prison- interrupted discovery of John Coltrane in the '60s, and concludes with his final period, fresh out of rehab in the '70s and playing as if his life depended on it.

This was Pepper's reality, and the music on Disc Three, subtitled Consummate Art, is haunting, driving, drawn out and never stops swinging. It's this period that defines Pepper as a true artist, 20 years and a lifetime beyond the handsome and impossibly talented natural in place at the start of his career. An authoritative blues closes this set, but it's "Lost Life," an achingly beautiful but harrowing ballad that represents Pepper's raison d'être.

Pepper was such a masterful balladeer it made his transition to a Trane-inspired improviser—freer, wilder and angrier—as shocking as Bob Dylan going electric at Newport. Disc Two's Hard Art includes "So in Love," a standard that earns a lengthy interpretation, and "That Crazy Blues" and "Section D," two cuts that reach intense, squealing heights that mark Pepper's great leap forward.

Not that Pepper's '50s music is lacking. Done in the West Coast style, Disc One's Pure Art (Schrimer, 1979) features in-the-pocket drumming and lead horns darting around the piano-dominated rhythm. "Fascinating Rhythm" and "Begin the Beguine" are effortlessly cool and tenor man Warne Marsh is brought in for a bouncy "I Can't Believe that You're in Love with Me" and a deconstruction of "What's New."

Laurie Pepper calls Unreleased Art Volume IV a companion piece to Straight Life, her collaborative biography of her husband. As aural autobiography, these three discs trace the evolution of a jazz genius who lived one hell of a life and who was never more profound and masterful than at the end.