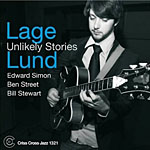 It is a great pleasure to watch the evolution of a musician—to witness the synthesis and refinement of ideas. And so it has been the case with Norwegian-born guitarist Lage Lund—who, in three short years of recording as a leader, has arrived at a new creative plateau.

Lund's first two recordings, Standards (Self Produced, 2007), and Early Songs (Criss Cross, 2008), displayed the guitarist's uniquely current sense of swing, and considerable technique. They cemented his burgeoning reputation as a force on the instrument and as a worthy interpreter of the jazz tradition. Unlikely Stories, however, comprised entirely of original compositions, finds the guitarist reinvented. While Lund remains a muscular improviser, he has pared down his concept to better suit his compositional style, eschewing much of the traditional jazz vocabulary for more personal and more provocative sounds.

On this album, Lund's writing instantly demonstrates the ability to make compelling new music without ignoring precedent. On one hand, Unlikely Stories, like the majority of contemporary New York jazz, shows a thorough absorption of Wayne Shorter and Herbie Hancock, among other figures in the jazz pantheon of the 1960s. On the other hand, it is clear that Lund is searching for new sounds. Admirably, the composer never allows odd meter, advanced harmony, or pyrotechnics to do anything other than contribute to the music.

As for the band, Lund works in a quartet setting, joined by pianist Edward Simon, bassist Ben Street and drummer Bill Stewart. Simon's moody, sometimes terse accompaniment is an appropriate foil for the guitarist's soaring, feverish improvisations. Street and Stewart's rhythmic backdrop, at once spacious and intense, punctuates Lund's exotic melodies. It is apparent from the first few bars of "Swagger," the album's first track, that Lund has set out to make a truly contemporary statement as a bandleader.

What is so striking about this album is that the music is neither overwritten nor overplayed. Lund has composed compelling, distinctively modern music to be played by a thoughtful ensemble. In an era of jazz's history where virtuosity is often prized at the expense of musicality, it is reassuring to hear a recording such as this.

Swagger; Folly; Worms; 12 Beats; Drum; Life at the Bottom of a Lake; What We See.