By DAN BILAWSKY
February 10, 2012
Sign in to view read count 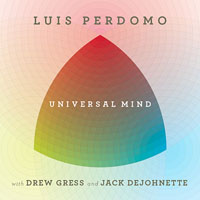 While pianist Luis Perdomo has earned plenty of praise for his work in Latin jazz settings with different artists such as percussionist Ray Barretto and saxophonist Miguel Zenon, classifying him as a "Latin jazz pianist" would be a mistake. Perdomo may earn his daily bread playing piano with many Latin luminaries and legends-to-be, but his work with saxophonist Ravi Coltrane and his own albums place him at the vanguard of modern jazz, in all of its expansive and inclusive glory.

Universal Mind is the Venezuelan-born pianist's fourth release as a leader, but it marks the debut of this compelling trio. Bassist Drew Gress and Perdomo built a chemistry and musical bond through their shared experiences in Coltrane's outfit, but the real story here is the connection between Perdomo and drummer Jack DeJohnette. The two push, prod and propel one another to great heights, while creating music that's thought-provoking, powerful, and unique.

While the drumming third of Keith Jarrett's group probably isn't hurting for trio work, DeJohnette seems to have stumbled into a setting that highlights his tour-de-force stick work better than any record in quite some time. He provides elastic swing when placed in a bright blues-inflected setting (Joe Henderson's "Tetragon"), lights an up-tempo fire beneath the band on "Rebellious Contemplation," explores open-ended constructs with Perdomo ("Unified Path I" and "Unified Path II"), and deals with metric shape- shifting on "Above The Storm."

DeJohnette's drumming serves as the engine that powers this trio and Gress is the bonding agent and balancing force that helps the group to gel, but Perdomo is the compass that leads them to their various destinations. He's capable of crafting pianistic paranoia as he doles out angular lines above arcing arpeggiated patterns ("Gene's Crown"), delivers Thelonious Monk-ish music with modern syntax (DeJohnette's "Tin Can Alley"), and explores the unknown to produce music of profound beauty ("Dance Of The Elephants").

Universal Mind sets a new standard for bravura trio work in the modern epoch. It's a high point in Perdomo's discography and, beyond that, an early contender for album of the year.