By EDWARD BLANCO
February 7, 2016
Sign in to view read count 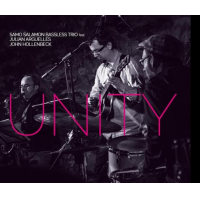 Veteran Slovenian jazz guitarist Samo Salamon has little use for the standards or contemporary traditional jazz music preferring instead, the more creative challenging landscape of today's modern jazz. With his nineteenth album as leader, the young guitarist explores the edges of the genre venturing into uncommon territory once again on Unity, where he continues employing his bass less trio format for the fourth time in his recording career.

On tap here is Salamon joining forces with two world-class players, renowned drummer John Hollenbeck and tenor saxophonist Julian Arguelles, one of the finest musicians in Europe. Together, this version of his bass less trio performs an unconventional set of music recorded live while on tour throughout Europe in 2014. Featured here are ten dynamic new compositions of the modern jazz type that actually borders slightly on the Avant-garde sound.

The date begins with the dicey sounds of Hollenbeck's splashy brushes laying down the beats to the dueling sounds of Salmon's guitar and Arguelles's howling tenor on the opening "Asking for a Break." The most ambitious piece of the album is "Kei's Venice" at twelve and a half minutes in length, it is perhaps the most melodic tune of the set. As is the case with a free style type of sound, there is a great deal of improvisation here lending that unanticipated or unexpected quality to the music.

As is often the case when a trio format is used, each of the players are provided with plenty of solo space with Salamon demonstrating his appreciable chops on the guitar throughout but especially on "Soundgarden," while Hollenbeck delivers a pounding performance and Arguelles is solid on both the tenor and soprano. Samo Salamon's Unity continues the guitarists journey into the sophisticated side of modern jazz with innovative music and excellent musicianship that make this outing worth exploring.