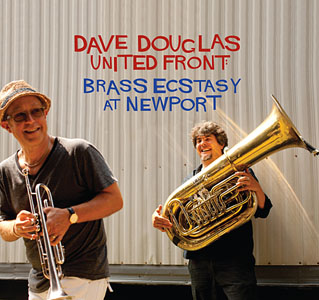 Brass bands, like wild animals are best viewed in their native habitats. Watching a lion on the savanna is a much different experience than seeing it caged in a zoo. Likewise, hearing Dave Douglas' Brass Ecstasy live is superior to any studio recording. Not that the band's Spirit Moves (Greenleaf, 2009) was a subpar Douglas recording; it's just that any band inspired by the trumpeter Lester Bowie and the New Orleans brass band tradition should be heard in public.

Recorded at the 2010 Newport Jazz Festival, United Front retains the original lineup of Brass Ecstasy, and the music sizzles from the nostalgic opener, "Spirit Moves," which acts as a processional, entering quietly as if the brass band was coming from down the street. Soon it's right there at the doorstep, and everyone is running to catch up with the parade.

This unique lineup matches the marching sounds of trumpet, tuba, and trombone with of Nasheet Waits' full drum kit, while Vincent Chancey's French horn balances the outside parade with the inside chamber, and does so nicely. Waits is more than a timekeeper, he's the turbo engine, with Chancey providing the polishing agent to the sound. On "Rava," a dedication to Italian trumpeter Enrico Rava, Douglas unfolds the tune with a soulful introduction, before delivering some musical acrobatics over the ever churning harmonies of Chancey and tubaist Marcus Rojas. Trombonist Luis Bonilla then solos over Waits' pulse, chasing some mystical demon.

The band plays all Douglas' originals, except for Hank Williams' "I'm So Lonesome I Could Cry," with Douglas' muted trumpet of Douglas a bit like 1957-era Miles Davis. When Rojas takes a solo, he blows his tuba by speaking/singing into his mouthpiece to the delight of the crowd. "United Front" crackles with energy, as does the closer, "Bowie," which mixes multiple styles into a tapestry of sound, skillfully woven into a party quilt.