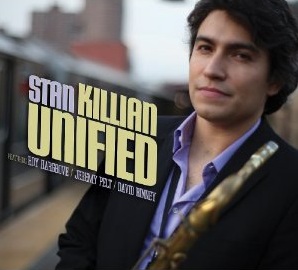 Stan Killian is one of those voices that doesn't make a great deal of noise, especially on Unified. His tenor saxophone is by no means a quiet one, but his is a voice filled with a mature gravitas that seems to emerge from a deeper sense of wisdom. His tone is resonant and echoes with mellow grandeur. His colors are rich and reflect the depths to which the tenor saxophone can reach, while still remaining accessible to encompass tender emotions. He plays in long, unbroken lines that weave in and out of lush melodies. This swerving style enables him to bend notes and approach melodic lines with hot harmonics that burn quietly, as the song lines unfurl, sometimes with much surprise. This keeps his entourage on edge and pushes them into reaching deeper into the pocket to come up with magical inventions, which keep the music alive and on edge.

This is not always obvious, but then Killian makes sure that nothing about his groove is obvious. However, it does take time to dawn on the ear. Killian seems to tow the harmonies behind him, leading with warm gushes of melody and a rumbling rhythm that is created by one of two bassists—Corcoran Holt, who has come to be one of the most impressive young exponents of the bass violin, and Bryan Copeland, who makes a strong impression on the tracks where he is featured. The magnificent drum work by Darrell Green and McClenty Hunter complements the stellar turn by the alternating bassists. And then there is also the wonderfully slanted harmony that comes by way of two fine horn men: Roy Hargrove, whose burnished tone brings a glorious glow to any music that he plays; and Jeremy Pelt, who is also fast becoming one of the more recognizable voices on the trumpet. And, of course, there is the mighty alto wail of David Binney, whose sharp and shredding voice brings much of this music to life.

Killian's music is a rich alchemy of abstract musical geometry and a concrete sense of the vivid narrative line that makes his muscular stories or musical paradigms accessible and even understood. But he also enlivens the music with a broad sense of wonder, as well as generous helpings of magic and mystery. "Twin Dark Mirrors" features some ghostly imagery that arises from the glow of Hargrove's magical horn and the quiet fire of Killian's breathtaking tenor. "Unified," "Center" and "Isosceles" create exquisite abstractions from which Killian and the ensemble forge gorgeous melodies entwined with utterly beautiful harmonies. "Window of Time" and "Eternal Return" reveals the composer's metaphysical side with their brooding, loping lines that only meet at melodic infinity. "Elvin's Sight" is the only chart not written by Killian, but by the brilliant Venezuelan pianist/cohort Benito Gonzalez; still, it fits this program well as it has hidden angles that demand inventive probing. All of this is done with aplomb on an album that grows in stature with every hearing.