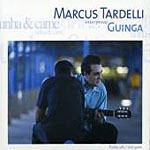 Even if Guinga never pronounced that Marcus Tardelli as "the greatest acoustic guitarist that Brazil has produced in history," the musical evidence on Unha e Carne (Fingernail and Flesh), would certainly put him on a pedestal right next to Egberto Gismonti, Sergio and Odair Assad. In fact, based on technique, expression, intonation and dynamics, there is a solid case for ranking Tardelli very close to guitarists such as Julian Bream and, perhaps, even to Andreas Segovia.

Guinga, himself a grand master of the acoustic guitar, produced this record. A story circulates of how he came to dedicate the title song, a stirring, delicate study of Tardelli's technique, which features finger movements invisible to the eye as they form a blur of flesh, picking at the compliant strings. His left hand barely touches the neck as he brushes the frets or uses a finger to put a damper on them to alter the sound by barely a quarter tone. Guinga tells of how, at one point, Tardelli's interpretation of his (Guinga's) music so overwhelmed the maestro that he fled from the control booth in tears of joy.

It is not hard to imagine how Guinga was so moved by Tardelli's playing. The younger man plunges body and soul into the sound he creates with both his hands as they caress and slide across the strings, demanding of them an almost human cry. "Mingus Samba" is such a moveable feast, even in the majestic echoes of just guitar strings. "Unha e Carne" is a study of almost psalmic fervor and intensity; it is as if the two men—composer and guitarist— are in communion with each other, bound by the Divine force of the song.

Tardelli is a musician clearly steeped in the history of Brazilian music. His uncanny, almost telepathic connection with the spirits of his ancestors is clearly in evidence when he strings together, like a necklace of pearls, a series of "Bia&#245es"—tributes from Guinga to the masters of the past like Jackson do Pandiero. These glittering studies form a dreamscape of moods from Minas Gerais, and are performed as movingly as any of Segovia's short guitar pieces.

The crowning moments are proverbially kept for the finale of this masterpiece. Guinga's choro variations—"Choro - Canção," Choro - Tango" and "Choro - Requiem"—are played with studied grace and unbridled genius. Such is the finesse of Tardelli's playing on this sequence that one box of Kleenex may not be enough. Then he does the impossible by raising the heat and the pulse-rate with a lightening "Frevos," in praise of perhaps tow dancers or musicians who absolutely own the character of the fevered dancing music ,"Vô Alfredo" and "Henriqueieta."

By the end of this record there is no doubt that Guinga is right, and that Brazil has produced a touchstone for how the instrument is to henceforth be played.