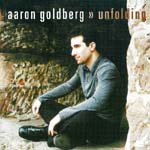 Jazz often translates to the unitiated as noise without meaning. Folks who love jazz in all its variations would make a good choice if their jazzless neighbors or co-workers were introduced to Aaron Goldberg. In his second album, Unfolding for the Cincinnati-based label J Curve, Goldberg provides ample evidence that he's ready to climb the top rung of pianists.

Working regularly as a member of the Joshua Redman Quartet, Aaron Goldberg shows in Unfolding that he's a clever, thoughtful, and accomplished purveyor of jazz as it's defined in the year 2001. With his wideranging knowledge of the piano, Goldberg provides a CD which should be a must addition to the libraries of piano devotees. Goldberg plays in many moods, from boisterous to gentle, savvy to experimental.

The album opens with an original called "Sea Shantey," which will send the listener's mind to a salty air and gentle breeze causing water to kiss the shore. Next comes "Isabella Meets Wally," which the liner notes describe as a blind date. A third Goldberg original called "If and Only If" keeps the listener leaning toward his audio equipment, not wanting to miss a single note.

Stevie Wonder's delightful "You Are the Sunshine of My Life" receives a blissfully effective arrangement, a wonderful sketch of one of rock's best-ever ballads. You will find yourself pushing the repeat button on your stereo, wanting to be blessed again and again with this dynamic arrangement of a truly terrific song.

The album contains four more Goldberg arrangements, as he proves without question that he can write as equally well as he can play. The support received by his backing musicians, Reuben Rogers on bass and Eric Harland at the drum kit, makes this album a smiling delight from start to the last notes of John Coltrane's "Equinox."

Sea Shantey; Isabella Meets Wally; If and Only If; You Are the Sunshine of My Life; 'Todd's Dream; PB and J; MAO's Blues; Second Chance; Equinox.