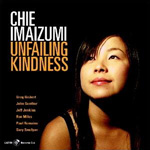 The youthful composer/arranger Chie Imaizumi has released a debut album after befriending trumpeter Greg Gisbert along the way. After making a demo from her performance at the 2004 North Sea Festival, she sent it to the Denver-based trumpeter who picked up the musical ball and ran all the way with it per selection of the musicians, rehearsals and full production of the album with Capri Records.

Originally an organist at age four, the Japanese-born Imaizumi switched to piano while studying at the Berklee School of Music where she won the Herb Pomeroy Award in 2003, and has taken this opportunity to showcase her abilities as a writer and arranger. The musicians aboard are generally all given generous solo opportunities and include such well known names as trumpet Gisbert as well as Ron Miles, baritone sax man Gary Smulyan and pianist Jeff Jenkins.

Many of the songs were written in memory of specific occasions. The opener, "A Change for the Better," begins as a deceptive tone-poem ballad and then quickly shifts into an up-tempo battle between Smulyan's baritone sax and Gisbert's trumpet. "The More the Merrier" brings back N'awlins Marching Band Second Line sounds effectively per Alex Heithlinger's plunger trombone, who is then matched by Jenkins' boogie and blues piano.

"Unfailing Kindness" was written as a thank you to Chie's parents for their support of her career and brings the work of John Gunther's soprano sax and Peter Sommer's tenor sax to the fore. The prettiest tune is "Lonely," which was composed about her separation from friends and family on a three month European tour. Guitarist Mike Abbott makes the beautiful melody statement, and solos while Greg Gisbert plays a most attractive flugelhorn.

The album wouldn't be complete without a flag-waver bebop tune and the aptly titled "Round and Round" is that example. Primarily a showcase for Gisbert's hot trumpet work along with Smulyan's baritone, Manavihare "Mimy" Fiaindratova's percussion and the drum work of Paul Romaine. The one tune that seemed out of place was a vocal of "Another Day," sung by Jeremy Ragsdale.

All in all, the finished product offers a pretty good snapshot of Chie Imaizumi's current status as band leader as well as composer/arranger. Her music is pretty much mainstream without any pretensions of the avant-garde or retro aspects of new artists. The variety and attractiveness of the tunes are apparent and she should be well-prepared for a second venture.

A Change for the Better; The More the Merrier; Unfailing Kindness; Lonely; Round and Round; Adversity; Another Day.