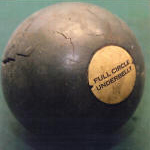 The British piano trio, Full Circle brings a wide range of influences and experiences to Underbelly, their debut album. The result is a slickly-produced collection of original tunes from three talented musicians and writers.

Pianist Joss Peach, who composed most of the tunes, is a percussionist as well as a pianist and plays with a bright, percussive, sound that immediately lends an upbeat feel to many of the tunes—"Rosie Lea" is a good example, with Peach trading rhythmic lines with the drums of Jim Whyte. Bassist Terry Pack's musical background encompasses rock and blues as well as jazz—including work with B B King, Dr. John and John Etheridge—while Whyte is a singer-songwriter as well as a percussionist. All three players have a strong rhythmic approach to the music.

"Underbelly" features Peach in a particularly percussive mode, his left-hand lines working with Pack's bass to create an ever-so-slightly threatening feel to a tune that would sound right at home on an Addams Family soundtrack before moving towards a more straight-ahead style. "Lorelei" opens slowly, Peach's light and precise piano backed sympathetically by Pack and Whyte, although the somewhat repetitive middle section overstays its welcome before Pack's re-appearance with a floating, hypnotic bass part. Whyte's own composition, "Dreamstone," is one of the album's most intriguing tunes with Pack again creating some atmospheric bass lines.

Pack's composition "El Pueblo" swings sweetly over his bass groove as all three musicians deliver a wordless vocal refrain—a slightly different version, "El Pueblo Nuevo," with a more sophisticated vocal chorus, appears on Pack's Palimpsest (Symbol Records, 2010)—and Peach plays his most upbeat and hard-driving solo. "A Reluctant Farewell" is particularly affecting and features Peach at his most delicate as well as showcasing some of Pack's more inventive bass playing.

Underbelly may not break any new boundaries, but it's a tight and well-constructed album. There is real variety in the writing and a genuine drive to the playing of all three musicians—Full Circle is an imaginative trio that deserves wider recognition.