By IAN PATTERSON
November 29, 2017
Sign in to view read count 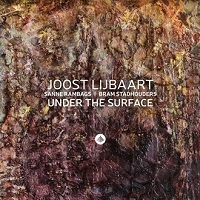 Silence frames music—before it sounds and after the final vibration of the last note has died. Often associated with an absence of communication, silence is also revered in certain communal ritual/cultural spaces. Poetic or damning, eerie or calming, silence never leaves us indifferent. Some composers have embraced it to a significant degree as part of the compositional process, John Cage's "4'33" being surely the most famous example. With Under the Surface Dutch drummer/percussionist and composer Joost LIjbaart embraces silence as an important element of the spontaneous interplay between himself, singer Sanne Rambags and guitarist Bram Stadhouders.

Although the musicians in turn guard silence, intermittently and repeatedly, there is never a single moment without play. Instead, where silence plays protagonist is in its necessity as the environment in which to listen to and fully appreciate the trio's susurrus improvisations. Joost's spare playing and sotto voce use of brushes and mallets here echoes his work on Batik (Challenge Records, 2015)—an approach seemingly light-years away from his long-running gig with Yuri Honing's electric ensemble Wired Paradise. Yet even in that environment, Lijbaart has demonstrated that economy and subtlety are often more powerful and persuasive than their opposites. On the essentially acoustic, chamber-like music of Under the Surface even the smallest gestures are amplified.

Rambags' original poetry provides the starting point for half the pieces, her introspective lines deceptively simple yet inviting, and above all contemplative, setting the tone for the wholly improvised musical exchanges. Her whispered intro to "Silent Conversation" draws delicate, dreamy percussive responses—isolated woodblock soundings, shaker and brush rustlings, harp-like lyre strums. The singer's spoken-sung words, delivered slowly and softly, exert a quiet spell on the music, which punctuates and subtly buoys the gentle vocal stream.

"Above" features the only non-original poem, Wallace Steven's austere yet hypnotic "Thirteen Ways of Looking at a Blackbird." Here, Rambags glides on the back of insistent rhythms and eddying acoustic guitar arpeggios. Rambags' tone and pace remain constant as the musical pulse quickens and intensifies, her wordless singing towards the end adding an ethereal allure. The aptly named "Dream Cave" sees Rambags recite then sing, lullaby-like, over minimalist gongs and silvery lyre voicings.

More animated the trio's completely improvised dialogues, notably on "Adem"—where Stadhouder's probing counterpoint to Rambags' repetitive chanting is underpinned by Lijbaart's less-is-more mallet and crying-cymbal atmospherics—and on the powerful "Going Native," with its tribal rhythms, spikey guitar and vaguely American-Indian-esque chanting. In a set of varying emotions, bells, shakers and mini-chimes infuse the bucolic "Together," as vocalist and guitarist merrily dovetail, while "Sibylla" charts hauntingly balladic terrain. The trio sings off with the dream-like "Before," ghostly synthesizer drone providing the backdrop to Rambag's beautiful wordless song.

Under the Surface signals a change of direction for Lijbaart away from strict compositional form to more open-ended, improvised excursions. Clearly there's a pre-conceived aesthetic at work here that stems from minimalism and whose vocabulary is dictated by intuitive drives and responses. That the resulting music, so beautiful and affecting, feels finely sculpted, is down to the chemistry between these fine musicians.

Silent Conversation; Above; Dream Cave; Adem; Together; Kyrie; After Silence; Under The Surface; Sibylla; Going Native; Before.