Superbrass: Under the Spell of Spain 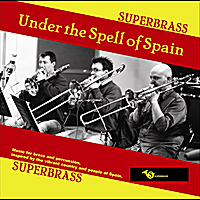 Duke Ellington is quoted anecdotally as saying there are only two kinds of music—good and bad. It's quite possible that, after experiencing Under the Spell of Spain, there might be yet another category—music magnificently defying description. Rest assured Superbrass' disc is very good; however, while it is not an entirely jazz-focused effort—leaning heavily on the orchestral ensemble style— Under the Spell of Spain defies any category other than: superb.

Comprised of some of the United Kingdom's finest orchestral and commercial players, Superbrass is a percussion-driven brass band that is just that—super, in every regard. Using a platform of beautifully scored medieval ("Como Podens Per Sas Culpas," "Dindirindin") and Iberian-tinged ("Tientos y Danzas") original selections, all delivered with just-this-side-of-fire, the group's performance is enthralling.

Royal Philharmonic bass trombonist Roger Argente leads other top-tier British players through their paces. From the first bass drum pounding and chordal announcements to the CD's closing chords, Superbrass soars through a performance that is reminiscent of the finest of film or programmatic music; there are musical stories to be told here. That's not a surprise, since Argente and other fine musicians in this stellar group are regulars on films such as Gladiator, the James Bond and Harry Potter films, and many others. These are studio chops performing and it shows—con brio.

The outstanding Under the Spell of Spain is, indeed, spellbinding, Rather than resorting to unnecessary cliché, Superbrass' spell entices, seduces and invigorates.

Title: Under the Spell of Spain | Year Released: 2012 | Record Label: Self Produced