Under the Banner of McBride: Two Bass Hits from a Low-End Giant

By DAN BILAWSKY
May 16, 2013
Sign in to view read count
Bassist Christian McBride is many things to many people. Leader, sideman, writer, and conceptualist are just a few of the hats that he happens to wear on these two quintet- centered dates. One album puts McBride's name up in lights, while the other finds him in a supporting role, but his work is central to the success of both outings. His on-the- money groove work, killer chops and tasteful tidings tie these albums together; they both share space under the banner of McBride. 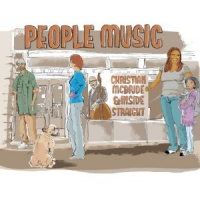 Music is rarely polished and potent; rounded surfaces and sharp edges don't usually work well within the same piece of artwork, but McBride believes that both belong here. People Music is all about closing the gap that exists between music for uninitiated ears and music for the music makers—fire and fun both find a way to peacefully and positively coexist on this one.

McBride values the musician/audience connection in his work and, while he has no intention of watering down his music to please the masses, he does try to connect with people, an intention that's obvious when listening to the slick and cool "Unusual Suspects," upbeat "Dream Train" or absorbing "Ms. Angelou," which features some attractive soprano saxophone work from Steve Wilson. Other highlights include an intense-yet-controlled album opener ("Listen To The Heroes Cry") and a gentle, groove-conscious closer written in honor of the late Whitney Houston ("New Hope's Angel").

Part of Inside Straight's charm surrounds the instrumentation of the band and, while the construction is set in stone—with saxophone, vibraphone, piano, drums and, of course, bass—the personnel listing proves to be malleable. McBride, Wilson and vibraphonist Warren Wolf are constants, but a game of musical chairs takes place with the other two seats. Pianist Peter Martin steps in for Eric Reed, who was a strong presence on the band's debut—Kind Of Brown (Mack Avenue, 2009). He forges a deep bond with drummer Carl Allen, who also appeared on the band's maiden voyage, but both men are given the boot on two occasions: "Listen To The Heroes" and "Dream Train" find drummer Ulysses Owens, Jr. Jr. and pianist Christian Sands holding musical court in their place. This personnel-shuffling scenario could cause some sort of sonic or stylistic inconsistency in theory, but that fate never comes to pass; all of these guys are too damn good at what they do to let that happen. 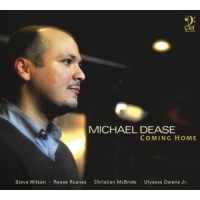 Trombonist Michael Dease marveled at McBride's work long before he knew the man, but that was then and this is now—at this stage of the game, he and McBride are colleagues and friends. Dease put his trombone to good use on McBride's breakout big band record—The Good Feeling (Mack Avenue, 2011)—and McBride returned the favor here, even going one better by penning the liner notes that accompany this album. McBride speaks highly of Dease—the man he calls "Solid Gold"- -and the trombonist deserves every bit of praise passed in his direction; his masterful mute work, sprinting slide and melodious suggestions mark him as one of the most well- rounded trombonists in the game today.

Dease and McBride exhibit a degree of low-end simpatico that few bass/bone pairings achieve, but the musical empathy doesn't stop with these two men. Two aforementioned McBride associates—young drumming phenom Ulysses Owens, Jr., and saxophone veteran Steve Wilson—also fit in quite well, and pianist Renee Rosnes's work is some of her strongest in some time.

The program balances muscle and might with melodicism and mood lighting. One minute, Dease might be hightailing it through an Oscar Peterson tune ("Blues Etude"), and the next minute he might be waxing poetic on a Duke Ellington classic ("In A Sentimental Mood"). Oddly metered originals ("Good & Terrible"), briskly swinging classics ("Just In Time") and fusion-istic fare cast in an acoustic light ("Solid Gold" and "Take It To The Ozone"), comfortably share the same living space. Wilson is his usual solid-and-dependable self; Rosnes has too many fine moments to mention; and Owens deserves a shout out for his brush solo on "Just In Time." But McBride is the MVP. He may be the only musician on the planet capable of personifying a rock, a thoroughbred, a keeper-of-the-flame and an innovator all at once.

Tracks: Solid Gold; Motherland; Blues Etude; In A Sentimental Mood; Good & Terrible; Lifewish; The Shade Of The Cedar Tree; Just In Time; All Heath; The Release; Take It To The Ozone.