Mark Lambert: Under My Skin 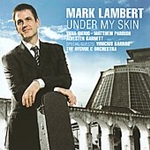 Revisiting classic standards is always somewhat risqué—a challenge, to say the least. Where does the balance between the familiar and the overlooked lie when it comes to repertoire? And how much further can the envelope be pushed without the music being absolutely boorish and unrecognizable? Mark Lambert answers both these questions in spectacular fashion in his remarkable tribute to the jazz standard in Under My Skin by recasting the music in an utterly contemporary and relevant setting, and with a small but polished group of musicians.

The music strikes a chord right from the opening bars of "I Love Paris," Cole Porter tribute to his adopted city during the First War. Lambert and pianist Louis Van Taylor, who does most of the arranging, set the song amid a city in the lurid shadow of ethnic unrest. The result is an ironic, brilliantly crafted opening to the song, which features the line "I love Paris in the springtime..." sung against a backdrop of Arabic music, with its characteristic ululating wail. This is before the second part of the chorus, the song's head kicks in, swinging madly, almost as if to restore a semblance of sanity to the artist's world. The song exposes a raw intensity in Lambert's world, one in which he shows himself to be touched by a myriad of things that surround him.

There is much to recommend in Lambert's unusual treatment of such classic Broadway repertoire, which is always surprising, fresh and resplendent in invention. Porter's "I've Got You Under My Skin," which always seems to get the "Ole Blue Eyes" treatment, is turned into a shuffling bossa nova rhythm with the inclusion of some tasteful percussion from the palms of Vinicius Barros. Here Lambert is on more familiar ground as he reiterates his deep love and understanding of Brazilian rhythms. On Walter Lloyd Gross and Jack Lawrence's "Tenderly," Lambert navigates the song between classical and jazz with an emotion so strong that it he turns it into a veritable coiled spring, only releasing the emotion at the very end. On George Gershwin and Ira Gershwin "But Not For Me" Lambert puts a hard twist in the inner ear, just as he does on a bright new arrangement of Vincent Youmans' "Without A Song."

However, the most unusual song in this collection is a rendition Cream's "Sunshine Of Your Love." This psychedelic track is wildly reconceived with hard-hitting percussion, and a slow ponderous sledgehammer grind that is almost unrecognizable from the original. However, the melody constantly bursts through as Lambert winds his slightly nasal way through bluesy strains.

Lambert's performance on electric and acoustic guitars is consistently superb, especially on Rogers and Hammerstein's "This Nearly Was Mine." "Vana" Gierig proves himself to be just as wonderful an accompanist as he is a soloist, and bassist Matthew Parrish shows great sensitivity, as does the superb drummer, Alvester Garnett, on this memorable set.

I Love Paris; I've Got You Under My Skin; In The Wee Small Hours Of The Morning; Sunshine Of Your Love; Tenderly; But Not For Me (Intro); But Not For Me; This Nearly Was Mine; Without A Song; Tight.