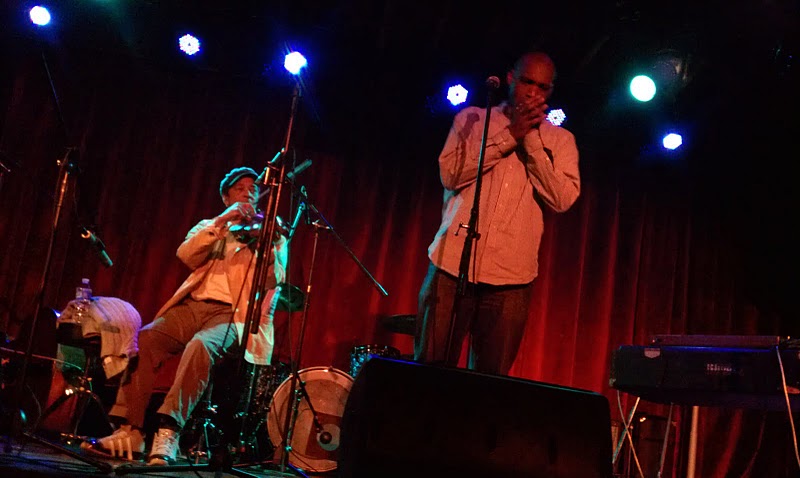 Sometimes a great idea just begs to be used again. The first performance of Search and Restore's "round-robin style" improvisation cycle last December proved its worth went beyond novelty. This time, the improvisatory pairings (improvised in both musical content and the pairings themselves) amongst 15 musicians kicked off the second day of the Undead Jazz Festival and the first of the festival's three days in Brooklyn. Selected and paired at random, each musician brought the spirit of unrestrained dialogue to The Bell House in Park Slope.

There probably could not have been a better choice of musician to kick off the cycle than vocalist Dean Bowman. He began the night with a rich, low, gospel dirge, occasionally shifting into biblical-type lyrics. His rich timbre shifted in sonic quality and his extended technique included a crackling, almost yodeling type vibration. He clapped his hands together, making bird-like whistles as the first duet began.

Violinist Charlie Burnham quickly established a pulse to ground Bowman with gentle string plucks. When Burnham began to bow, Bowman established a mournful, yearning rapport, shifting into a gypsy dance on top of a single note from Burnham. The gospel/gypsy hybrid was still resonating as the vocalist left for another string player.

Cellist Erik Friedlander lent his keen ear and sense of harmonic invention to create an almost composed sounding duet with Burnham. He immediately began to accompany Burnham with walking bass notes that flourished into flamenco/classical finger sweeps. They came together with their bows in a rapid, whirling dervish chase with Friedlander setting up the first of many atonal melodies throughout the night. The chase had become urgent and hard-edged as Burnham left Friedlander playing a single note.

Multi-instrumentalist Elliott Sharp jumped onto Friedlander's single bowed note with a high soprano sax flutter. The two musicians began shaving off gravelly textures, Sharp's little note clusters falling on Friedlander's thumb slaps. The textural duet grew even less melodic as Sharp began doing little more than whispering but came back into full swing with Sharp bending notes in imitation of the cello. The duo got into a rocking rhythm as Friedlander left the stage.

Bassist Chris Lightcap luckily found Sharp in a brief lull, taking his opportunity to start his low register thumps. Like the previous duet, Lightcap and Sharp were more interested in creating texture and dichotomous atmosphere, rather than any strong melodic content. Lightcap's rollicking low notes gave Sharp a prime opportunity to swirl around. They found themselves in a unique interplay between bowed bass and flutters when the first drummer came up.

Yeah Yeah Yeah's drummer Brian Chase, contrary to what one might have thought, obliged more than Lightcap's rock sensibilities. Lightcap had formulated an emerging bass line and Chase acted responsively, accenting the bassist's rhythms with bass drum and tom-tom punches. This improvisation formula seems to favor Middle Eastern style dialogues and this was another example, the bassist and drummer creating a rocking, pulsating dance. They were at a fever pitch when the Lightcap left the stage.

Alto saxophonist Darius Jones picked up on Chase's splashes with a yearning melody and gave Chase a chance to stretch when he set up a series of microtones for Chase to solo around. The two landed on a jazz-informed melody in which Chase inched further away from free improvisation, toward a rumbling swing. They were still only hinting at jazz when the drummer left the stage.

Jamie Saft let the rhythm drop out for something wholly different. The keyboardist, without hesitation, began emitting alien-sounding, phase-shifting electronic tones. Jones was very welcoming to this approach, beeping and howling like a warning siren. Saft stirred up a pitch-bent melody while Jones played growling notes as if he were one of Saft's keys. The cosmic duet rose and fell with intensity, finally settling into a middle ground for an incoming trumpet player.

Trumpet player Kirk Knuffke made a successful attempt at warming up the cold, alien atmosphere created by the previous duo. Knuffke's warm, modern jazz sensibilities goaded Saft to switch to his Rhodes, pulsing out crystalline, almost post-rock sounding tones, but then the keyboardist had the opportunity to show he was not just an electrician with his warm, melodic development. He let his last tones die out as the program's first and only two-horn duo formed on stage.

The sudden absence of the keyboard left the trumpeter and saxophonist Chris Speed to pick up the remaining pieces of melody as the pulse quickly evaporated. Speed and Knuffke began a volley, bouncing melodies back and forth between them and utilizing their whole range. At one point, they hit on grating, long tones that sustained for a few moments before wobbling away. Speed had landed on a sinister melody when the second drummer entered.

Speed and drummer Jim Black already have a strong history together, but as Speed wasn't expecting him, their first notes together had the challenge of finding common ground. Black's duet with Speed was actually a melodic one, Black's cymbal screech emitting a single note for Speed to solo around. As was expected, Black came around to fleshing out his famous blast beats while Speed soloed at his reedy best, and then left Black to his devices with a sinister parting melody in preparation for one of the more unexpected duos.

The above is not an error; the eleventh duo was two drummers on one extended drum piece. Dave King began his duet with Black with loose drum pieces laying on the ground next to the set, as they punched out tribal rumbles. The two of them switched places wherein King played rock beats, driven into overdrive by an invasive Black hitting the set's tom-tom. Like his duet with Speed, Black found himself using his cymbal creaks in an intense duet with King, and literally jumping on his kick pedal to make the loudest sound possible.

The mood came way down for the duet between King and guitarist Marco Cappelli. The acoustic guitarist emitted a gentle Spanish style melody accompanied by King's flourishes, then turned up the heat a bit with open chord smacks and use of a second set of droning strings. The duet coalesced into a 90's acoustic grunge jam, which only lasted briefly before Cappelli began to tune his guitar into a dissonant microtonal note field. Cappelli's continued his experimental expansion as King left the stage.

Cappelli's guitar tapping was joined by pulsating, minimalist tones from vibraphonist Chris Dingman. Dingman's continuous tones had a spacey, sci-fi quality, almost suggesting tonality while never quite reaching it. Cappelli's de-tuned guitar created a unique "synthetic vs. natural scale" effect with Dingman as they scrounged together a lilting, searching melody.

Another pair that is used to playing with each other (earlier in the festival, actually, with Harris Eisenstadt's group), bassist Eivind Opsvikstepped into a niche in Dingman's pulses to set up a rhythmic tattoo. Opsvik's bass line gave Dingman room to stretch out with fast runs up and down the vibraphone board. When they reached a sinister modal melody, Opsvsik switched into a rapid finger picking as Dingman left him to play solo.

Opsvik, like he done on one of his intros earlier in the festival, created a duet with himself, volleying two notes in different registers against each other. He shifted into a singular low note before bringing out his bow. Then the bassist crooned out a gentle melody while keeping the single low note reverberating. Opsvik ended the night as pensively and sublimely as it had begun.