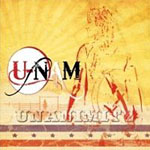 U-Nam (aka Emmanuel Abitebol) may be taking this "u" thing a bit far, but his jazz-funk guitar stylings are so pleasing to the ears, that his little eccentricities can be forgiven.

Upon first listen, the disc sounds as though George Benson decided to make a funk record. That's not necessarily a bad thing, but U-Nam is an innovator, not an imitator.

Unanimity sounds, perhaps, how Benson might have had—after virtually creating the smooth jazz genre singlehandedly—he decided to go to Paris, immerse himself in some old school '60s Motown, Stax and Atlantic soul music, and then record an album with the results. U-Nam isn't just a particularly attentive student of the Benson approach to guitar stylings; he also brings his own ideas to the party.

Backed by both horn and string sections, U-Nam likes to get down and get funky, as he demonstrates both an appreciation for a good groove and not taking himself too seriously. "(Hang On) U-Is Comin'" isn't exactly Sam & Dave's "Hold I'm Coming" but it's certainly inspired by it. U-Nam's a pretty good bassist too, as he shows on his cover of George Duke's "Shine On."

The title track stomps all over the joint, with U-Nam riffing madly all over the strings and horns. Marva King adds energetic vocals to an effective rendition of Martha Reeves and the Vandellas' hit, "Dancing In the Street."

U-Nam left Paris to travel to Los Angeles and make his name there, but it wasn't an easy choice as he had to leave his family and friends behind. He pours the emotions of separation and longing into his music. "My Heart and Soul" is dedicated to his four year-old son. The chilled out pace of this track and "This Is Just 4 U" provide a little quiet time to stretch out and simply listen.

But Unanimity is a party record first and foremost. The only serious criticism is it's a bit long, clocking in at over 75 minutes. Some judicious edits might have tightened up some tracks that go on a minute or two longer than necessary.

Aside from not knowing when he's got too much of a good thing going, U-Nam promises to be an import that, as time goes by, will provide some real competition for domestic guitar-slingers.

Viva La Revolucion (Un Jour Nouveau); Funk-4-U-Nity; Shine On; Unanimity; This Is Just 4 U; The Day I Met U; Soul Boy Reincarnation; (Hang On) U-Is Comin'; 4 Ever Urs; My Heart & Soul; Dancing In the Street; Losing My Mind; U Could Make It Happen; Soul...ism.