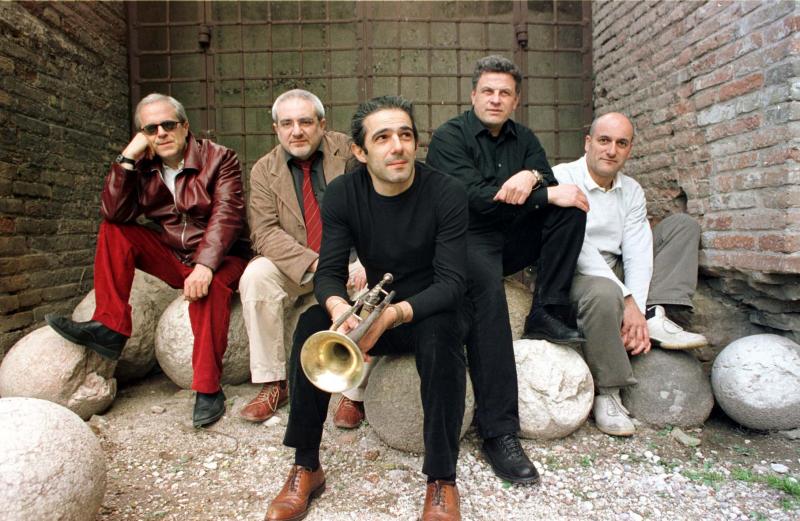 Umbria Jazz Winter #19
Perugia, Italy
December 28, 2011-January 1, 2012
Stan Tracey Trio
Stan Tracey started the morning of his 85th birthday in the best possible way: playing jazz for an audience which was enthusiastic to share his music in such an iconic moment. Opening "Panama Red" with his impeccable, swinging vibrato and an elegant essentialism, Tracey showed a cheerful sense of happiness throughout his selection, and a naturally gentle, classic style in his beautifully subtle sense of rhythm is.

It was easy to imagine a Woody Allen scene developing in his mind as he winked, playing smoothly, backed by Clark Tracey's sharp drum intro in "Don't Mean a Thing" and a series of increasing double bass accents by Andrew Cleyndert, enhancing the pianist's mastery and refined, humorous mood.

An Italian giant of jazz guitar whose never-ending list of collaborations features the dream of every guitarist—playing on stage, side-by-side with Django Reinhardt in 1949—Franco Cerri, in his flourishing professional jazz career is also renowned for the generosity with which he has shared his talent and passion with other generations of jazz guitarists, including those studying at the Civica Jazz School he founded in Milan.

He has the enthusiasm of a child and the gentlemanly style of a passionate musician who has always loved his audience with the same affectionate joy and warmth he feels for his music. His style is pure grace, with a touch of delicate humor that the audience of Umbria Jazz Winter could see sparkling through the air on "Fine and Dandy." His soft touch turned "Days of Wine and Roses" into a lullaby-like romantic pearl.

Cerri's mystical and heartfelt style was symbolized by his choice of Plato's quote on music: "It gives soul to the universe, wings to the mind, flight to the imagination, and charm and gaiety to life and to everything."

Joining the guitarist were an extremely spiritual Hammond organist, Alberto Gurrisi on "Unforgettable," and sensitive double bassist Daniele Mencarelli in the bossa nova central section of the set. Drummer Andrea Melani was swiftly smooth throughout the concert, particularly on "Ultimo Corcovado," mixing the Brazilian atmosphere of the original song with his own personal lyricism.

Cerri's solo piece—an exquisite arrangement of Ennio Morricone's theme for the 1984 film Once Upon a Time in America—was a memorable moment of touching delicacy and its emotional depth brought the audience to happy tears.

Chano Dominguez's exploration of Miles Davis' Kind of Blue (Columbia, 1959) within the cultural context of flamenco seemed not only the natural evolution of "Flamenco Sketches," but also a highly stylish form of musical syncretism.

The elegantly crafted arrangements were immediately shining in " So What," a delicate solo piano intro slowly followed by drummer Manuel Masaedo's brushes, a percussive double bass by Mario Rossy and the flamenco hand-clapping and heel-thumping of flamenco dancer Daniel Navarro. Blas Cordoba's voice mingled with Masaedo's percussion so easily and smoothly as to seem another instrument.

Dominguez managed to mix in his style the percussive nature of the Flamenco's beats with the essential texture of Miles' original pieces. The flamenco core of the concert was iconized at the centre of the stage by Daniel Navarro and his bullfighter moves, and by singer Blas Cordoba's mystically inspired voice. The Spanish folk musical context imbued all the arrangements without overpowering them. The balance of melody and beat was superb, and the rhythmical changes a delicacy for the ears.

After the duo concert with Michel Camilo, which sounded like the encounter of two almost opposite souls—the flamboyant rowdy and the lyrical romantic—pianist Danilo Rea opened the morning of the third day of Umbria Jazz Winter #19 with drummer Ellade Bandini and double bassist Ares Tavolazzi.

The project was a jazz tribute to The Beatles. Their songs, artfully metamorphosed into jazz, were interpreted with impeccable touch on the piano, and a rhythmical palette on both drums and bass of astonishing sensitivity.

The piece was clearly not a simple homage, but a full reworking of the original versions which were smoothly mixed with the signature elements of the trio: Rea's marvelous climaxes, Bandini's surgically precise brush beats in "And I Love Her," and Tavolazzi's's pulsating sound which, on "Come Together," sounded like a giant's heartbeat.

The first concert, with the Quintet, demonstrated the impressively wide musical scope of Fresu's arrangements, from a vibrating version of Mia Martini's "Almeno tu nell'universo," with an exquisite piano intro by Cipelli and the heavenly timbre of Fresu's trumpet, to a melancholic "Lascia ch'io pianga," where the rhythm session seemed to literally weave the underlying beats, thread by thread.

The collaboration with the Alborata String Quartet, on the other hand, showed an extremely original dialogue between jazz, contemporary classical music, and the Sardinian folk tradition. Alborada's own name comes from a Spanish dance brought to the Italian island during the Catalan-Aragonese occupation.

The first piece, "Miserere of Santu Lusurgiu," showed its religious melodic line, each phrase imbued with mystical minimalism. The classical atmosphere set by the strings' sonorities in the second piece, "Corale Pop," was emphasized by Fresu's sudden electronic reverberations. On Karl Jenkins' "The Fifth Season," a sophisticated viola intro was heightened by Fresu's flugelhorn, echoing with pure breath sounds passing smoothly through the mouthpiece.

At the end of the concert, an unusual 3/4 version of the Sardinian "Ave Maria" (arranged by Didier Leissen)—a sort of religious hymn for the Italian island—was played by Fresu's half-muted trumpet, while the strings resounded in the concert hall like a Gregorian chant of incredible intensity.

Sellani opened his concert with a fast tempo version of "Besame Mucho," relying on a soft touch which created a sharp, stylish contrast with his pace. His notes left the room to a loud, percussive solo on double bass by Massimo Moriconi.

The extra slow Chet Baker-influenced version was surrounded by an elegiac aura, mirrored in the muffled drumming of Massimo Manzi. The subtle, vocal quality of Sellani's style reached its height in his solo encore—a memorable version of Bruno Martino's "Estate" filled with emotional pauses which showed all the crystalline clarity of the pianist's harmonic choices.

An original piece by Sellani, originally conceived for a 30-piece orchestra, closed the set. The dynamics passed from one extreme to another, from a ruthless run to a meditative pianissimo. Sellani joked about the fact that the composition was supposed to be his self-portrait, and thus pretty ugly. Yet, the result was a jewel of compositional beauty.

Singer Greta Panettieri has a warm, intense, round voice which seems to be made for the hardest, longest, most dramatic forms of scat singing with the timbral warmth of Sarah Jane Morris, and the vocal extension of a classically trained soprano not even slightly afraid of hitting high notes. The singer, accompanied by bassist Daniele Mencarelli, pianist Andrea Sanmartino and drummer Stefano Tamborrino confirmed the upbeat, energetic complexity of the group's self-produced Brazilian Nights: Live at Zincbar (2011).

Passing from fast-tempo samba rhythms to more funk jazz sonorities toward the end, the group revealed a high degree of dexterity in a surprisingly wide range of musical idioms, together with the ability to show the full power and sophistication of Panettieri's voice. A voice that will last.

This was a performance poetry moment dedicated to 9/11, with a loud, lyrical reading, à la Amiri Baraka, accompanied by a percussive double bass, then the beginning of "Un Poco Loco," developed around a deliberately loud and chaotic climax. And this was only one of the surprises realized by the Lydian Sound Orchestra on stage.

Founded by conductor Riccardo Brazzale in 1989, the band shared a series of arrangements with the audience, which were incredibly refined in its choral effects. The abstract, cerebral sonorities of Roberto Rossi's "Qui Porta" were intertwined with Paolo Birro's sudden, straight piano inserts and alternated with double bassist Marc Abrams' phrasings, which mimicked the operetta genre. On "Mood Indigo," the main melodic line was in the hands of careful piccolo trumpeter Kyle Gregory—muted, on this occasion—for a sound that sounded like that from Puck in the enchanted woods of Shakespeare's famous play, A Midsummer Night's Dream.

The orchestra's version of Nino Rota's "Amarcord," where Pietro Tonolo's saxophone resounded with all its lyrical intensity, was heightened by trumpeter Paolo Fresu's guest appearance on flugelhorn in the middle of the piece. Rota's ghost seemed to be part of the arrangement, so sensitive was their touching interpretation.

As he said while describing his passion for the bandonéon, Juan Pablo Jofre Romarion decided to become a professional musician twelve years ago, while Argentina was facing one of the worst crises in its history. A choice that some may have seen as crazy at the time, yet it brought him to spend the first day of the 2012 Orvieto with the string group I Solisti di Perugia, and his own project dedicated to Astor Piazzolla.

The intro to the concert developed around long-held notes reminiscent of an extreme minimalist approach to Piazzolla's melodies, with obsessive vibratos held as long as the instrument's breath allowed. Abstract music, yet never detached—rather, the opposite.

On "Otoño Porteño," the strings surrounded Jofre's solo with the warm embrace of a single note, while toward the end, after a surprising change of rhythm, the first violin solo resonated with pure romanticism.

Jofre's original compositions were similarly sensitively crafted. On his "Four Tango Movements," the vibratos on bandonéon were so intense as to mimic the depth of a church organ, while on "Hard Tango," initially filled with somber tones, they suddenly turned into a fast-paced joyful hymn to life.

Listening to pianist Gonzalo Rubalcaba it might have been interesting to get inside the mind of Dizzy Gillespie when he first heard the 21-year-old Cuban talent play in Havana. That was the moment when Gillespie decided to invite Rubalcaba join him onstage the following day.

Each note in this pianist's phrasings felt like a perfect diamond, shining with its peculiar light. Rubalcaba was not afraid of letting the silence flow around his notes. On "Lennie's Pennies," even the breaks seemed to have their own voice.

There was a refinement in the emotional chromaticism of his playing which was almost alchemic in nature. On "Nueva Cubana" Marcus Gilmore's rim shots, bouncy and sharp like carnival fireworks, surrounded Rubacalba's vitally solar fortes on piano, with a repeated high note that felt like joyful laughter.

The researched variations of the Cuban pianist which filled the set with a sense of preciousness were in marvelous dialogue with Gilmore's polyrhythmic sensitivity and double bassist Matthew Brewer's exquisitely soft register.

The set felt like a hyper-technological, futurist 21st century experiment, from beginning to end. If the electronic echoes and distortions contributed to the contemporary feeling of these arrangements, the key to this surrealist set was another thing—magical exchanges between the horns and De Leo's falsetto vocals, alternated with kazoo and toy microphones, Guidi's essentialist piano and Calcagnile's oud drumming style.

It was a Fellinian experiment, filled with laughter, bounciness and a soft, mellow melancholia which ran across the lines through their final accelerated version of "Amarcord."