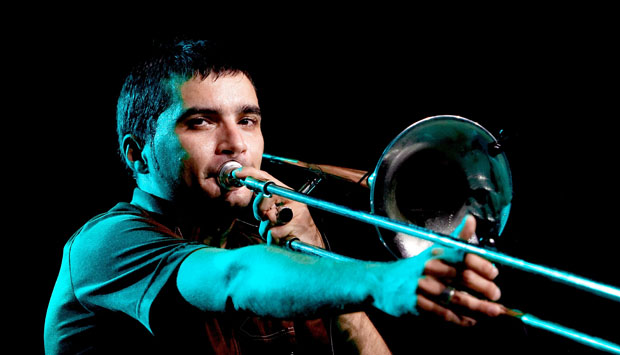 Umbria Jazz Winter #19
Perugia, Italy
December 28, 2011-January 1, 2012
In an Italy where the cuts inflicted to the cultural sector by the last Berlusconi government led a figure like Riccardo Muti to publically express his indignation, Umbria Jazz Winter # 19 was a confirmation of the incredibly rich and original patrimony that Italian arts and music have to offer on the international scene, including constant international projects realized by Italian jazz musicians and foreign icons like a piano duo featuring Danilo Rea and Michel Camilo, which enflamed Teatro Mancinelli on December 30, 2011.

The very first concert of the 2011 festival was a lively set by the group of students who won the Berklee/Umbria Jazz Award. This prize traditionally ends a series of summer jazz seminars held by specialists from Boston's Berklee College of Music at the Umbria Jazz Festival in Perugia, with the winners coming together as a group, this year organized and introduced by Italian bassist Giovanni Tommaso. The talented jazz musicians of this band, aged 13 to 22, revealed an exciting profile of young jazz in Italy and beyond. Along with drummer Andrea Ruffa, pianist Marco De Gennaro, alto saxophonist Francesco Pacillo, trumpeter Cosimo Boni and singer Giuliana Doré, the formation also included Israeli guitarist Eran Sabo.

The repertoire showed an extremely sensitive rearrangement of immortal jazz standards such as "Cherokee," "Anthropology," "At Last" and "I Got Rhythm." From the very beginning of "Cherokee," Boni revealed a peculiarly limpid tone and surprisingly mature command of breathless, long-held notes. On "Misty," De Gennaro's extremely smooth piano intro demonstrated a lovely taste for romantic minimalism, à la Erik Satie, while Sabo responded with a piercingly calibrated fortissimo.

On Ron Carter's "Eighty-One," on the other hand, Tommaso displayed a mixture of classical jazz bass intertwined with a very funky sonic texture. Finally, the carefully curated rhythmic changes in "Somewhere Over the Rainbow" allowed chance to fully grasp Ruffa's subtle sense of dynamics and the beautiful timbre of Dansé's voice, which moved from pianissimos to fortissimos with great ease.

Overall, the band gave the impression of a fully mature group rather than an ensemble of young jazz musicians at the beginning of their career. The happy enthusiasm of their youth was nothing but an added value to this high quality first professional performance.

A play on words only apparently based on novelist Marguerite Yourcenar's Memoirs of Hadrian (1951), the evening show which inaugurated Teatro Mancinelli was, in fact, a tribute to one of Italy's most acclaimed singers, songwriters and politically active idols since the 1950s, Adriano Celentano. If his voice is most famously linked to his version of Paolo Conte's "Azzurro" abroad—an unofficial anthem for all Italians—his broader repertoire is well-known inside his native country.

Neapolitan singer Beppe Servillo delivered versions of Celentano's songs imbued with a flair for poetic extremes and Pindaric flights, typical of the Neapolitan folk song tradition. This style reached its height in "Storia d'amore," a song about love-hate relationships and passionate, never-ending jealousy.

The musicians—saxophonist Javier Girotto, trumpeter Fabrizio Bosso, double bassist Furio Di Castri, pianist Rita Marcotulli and drummer Mattia Barbieri—navigated the high waves of Servillos's powerful climaxes with joy and total harmony, at times introducing them with impossibly fast and loud intros, almost mirroring the interior laceration of the lyrics on "Una storia come questa." In other cases, they backed the softness of Servillo's pianissimos with whispering, caressing phrasings, as in Girotto's solo on "A mezzanotte sai."

The concert showed a well-balanced and original mix with the pop tradition introduced by Celentano's successes and the contemporary jazz sonorities of the top-notch jazz musicians onstage.

Vamos—the forthcoming second album featuring trumpeter Fabrizio Bosso, saxophonist Javier Girotto, pianist Natalio Mangialavite, double bassist Luca Bulgarelli , drummer Lorenzo Tucci and percussionist Bruno Marcozzi—sums up, in a word, the constant sense of vibrant motion which is the very soul of its original compositions. Live, this fibrillating matrix was even more evident and contagious. The musicians were extremely loud yet emotionally close to the audience from the very first restless register of sax and trumpet on "Ochenta." 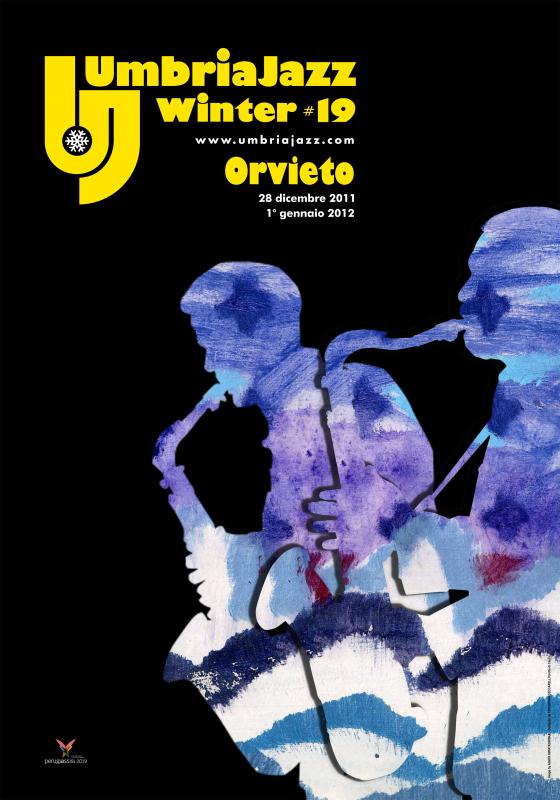 Bosso and Girotto seemed to twirl in an animated dialogue between close friends throughout the concert. Basso's ability to be smooth without ever approaching an overly mellifluous zone, while Girotto's metallic, note-filled sound clouds created the a cappella feeling of two voices perfectly intertwined, thanks to their uncanny ability to complement each other.

Similarly, the glorious exchanges between Marcozzi and Tucci on "Zoogami" gave the impression of a tarantula dance—a fast, up-tempo traditional blend of the music of Southern Italy with a Latin tinge.

Continuing their ongoing collaboration with trumpeter Enrico Rava, pianist Giovanni Guidi and trombonist Gianluca Petrella gave shape to a memorable duo concert, dominated by the bravery of extreme experimentalism. Guidi's trademark is the poetics of understatement—a whisper which, in its most lyrical moments, seemed to create an aura of Philip Glass's obsessive compositions within his improvisations. Petrella's musical vocabulary, on the other hand, was more abstract and futuristic; his trombone roared and rattled, whistled and cheered.

The duo's version of "Over the Rainbow" surprised even the most skilled listener with its unpredictable rhythmic changes, courageous muted sighs and a refined mellowness that seemed the extracted essence of the original melody. A subtly distilled emotional complexity was the primary scope of the duo's sonic idiom.

At one point, Petrella started playing while wandering around the museum, filling his peripatetic experiment with the funny, chat-like, grumble of his notes on trombone. His sparkly, show-off promenade was backed by Guidi's bluesy staccato, which brought the trombonist's humor back to a more secretively warm idiom.

The concert was introduced by the sensitive words of author Ashley Kahn, who shared some of his specialized research on Coltrane's masterpiece. In the hall of Sala del Carmine, the ethereal works of art by Massimo Chioccia and Olga Tsarkova, dedicated to Coltrane, surrounded the audience with essential blue shades.

The minimalist and rarefied arrangements of Coltrane's masterpiece—introduced and ended by Tonolo on mbira (thumb piano)—were coupled, throughout the set, by a series of graphic projections, mixing Coltrane's profile with sketches and documentary images of the urban settings which first witnessed his musical experimentations. If the emotional montage of these sequences reminded of Germaine Dulac, the polished music here carried the core of Coltrane's soul into a fascinating tribute.

Following the path traced by Yatra (Jando, 2011)—which means "travel" in Hindustani—the set developed around wide, atmospheric sonorities suggesting the freedom of open Mediterranean landscapes. The upbeat, percussive bass and syncopated, fast-tempo piano in "Il mare di fronte," with Sigurtà's crystalline trumpet filling the room, seemed to follow the adventurous travels of Wim Wenders' main character in his 2010 film, Until the End of the World. "Onda Minore," on the other hand, developed around a mixture of melancholia and joy, with Paternesi's delicate finger tapping on his snare drum surrounding a dream-like melody developed around nine minor chords. Together with Pietropaoli's touching compositions, an almost whispered version of Amie Mann's "Wise Up" was remarkable, closing the set with tenderness and everlasting charm.

The Dominican pianist's solo concert at Teatro Mancinelli opened the Latin Jazz section of the festival with a very diverse repertoire, selected to highlight the scope of Camilo's technical skills. Similarly, the day after, in his duo with Danilo Rea, "Besame Mucho" was followed by "Route 66" and preceded by Miles Davis' "Solar."

Michel Camilo's style confirmed, during all his Umbria Jazz Winter concerts, his love for paroxysmal crescendos, ending in breathtakingly long fortissimos, and an instrumental bravura built around difficult tempos and a hammering touch. He seemed to leave neither breaths nor breaks between his notes, with phrasings that were Proustian in nature, willingly built to proceed through an intricate stream of consciousness.

This may be the reason why his rare soft passages appeared like a poetic license to his hyper-loud signature. His real soul relied in a piano style which required not only high concentration, but extreme physical endurance.