Umbria Jazz Winter #18
Orvieto, Italy
December 29, 2010-January 2, 2011
The Alfredo Rodriguez Trio
Discovered, produced and hailed by Quincy Jones, Alfredo Rodriguez chose to contradict any potential preconception linked with the highly slippery definition of Latin Jazz to which his Cuban origins tie him. From the very first composition at his Umbria Jazz Winter performance, the young pianist's "Silence," it was clear that Rodriguez was avoiding more solar and joyful sonorities in favor of a sense of baroque melancholia, also building around obsessively repeated lead themes, as in "Transculturacion."

The young pianist openly demonstrated the threads of classical conservatory training, united with a more specifically jazz pedigree, which is undoubtedly imbued with a lot of Keith Jarrett and Bud Powell, to whom he dedicated his "Cu-Bop." In spite of the recognizable Cuban rhythmic variations which marked many of his tempos, during his most original pieces Rodriguez almost seemed to want to play jazz on a harpsichord—turning his piano into a hybrid instrument of a more baroque, metallic nature.

Rodriguez's bassist, Peter Slavov, preferred a soft, nonintrusive mellowness, while drummer Francisco Mela opted for a loud and controllably chaotic intro to "Oxygen," achieved by leaving a free cymbal vibrating on his tom. This choice worked harmoniously with the dark emotional palette which inhabited the core of Rodriguez's composition.

In the end, an extremely controlled and tenderness-filled solo version of "Stille Nacht" showed the other face of Rodriguez's musicianship, and gave a glimpse of the possible future evolutions of his arrangements of preexisting standards.

Known for their creative rearrangements of compositions ranging from Mozart to The Beatles to Herbie Hancock, the Italian group Quintorigo—featuring saxophonist Valentino Bianchi, cellist Gionata Costa, violinist Andrea Costa and bassist Stefano Ricci, and with special guest vocalist Maria Pia de Vito—delivered a marvelously orchestrated tribute to Charles Mingus. De Vito's voice, undoubtedly one of the most charismatic and intensely emotional voices of contemporary Italian jazz, introduced the audience to Mingus' life with anecdotal pearls before each piece.

Mingus' first love with the cello, as a young boy, was mirrored by an exquisitely unexpected pizzicato in "Fables of Faubus," recalling the heartbeat of a young master, perceiving his destiny through the strings' sound. Piece-after-piece, all the strings seemed to alternatively morph into Mingus' double-bass, reaching the heights of this transformation in their syncopated, film noir-like intro to "Moaning," which the sax followed with a rarefied purity of sound. 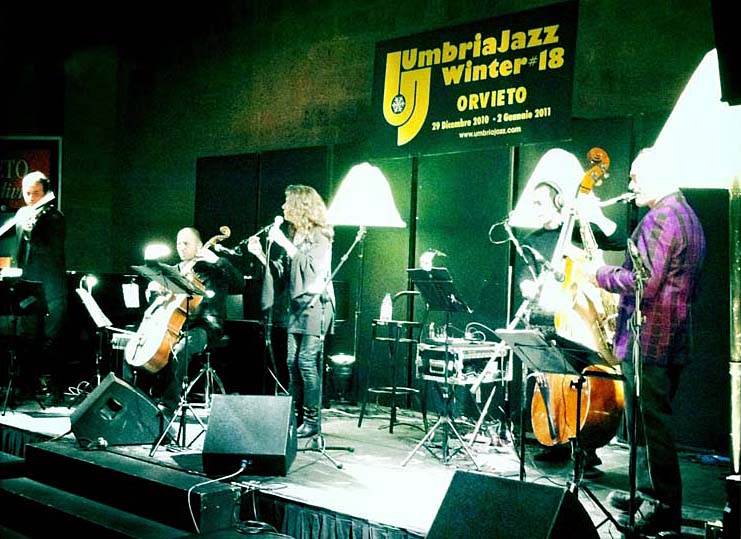 De Vito's sharp, yet delicate vocals first became one with the strings, and then led them with up-tempo scat-singing, leaving limpid, emotional marks on the texture of Quintorigo's arrangements. Her powerful expressiveness filled the air, accompanied by Quintorigo's humming and hand-clapping on "Freedom," in a way faithful to Mingus' original version. Her voice grew deeper and deeper, and the limpid amplitude of the refrain's notes filled the air with the sacredness of the spiritual tradition.

Each instrument represented the character in a conversation that ended naturally, in smiles and laughter, the audience feeling so rejuvenated that they started dancing in their seats. Anderson presented a diverse program, including a piece taken from his larger composition, "Sweet Chicago Suite," recreating the feeling of 1960s Chicago and a tribute to the Association for the Advancement of Creative Musicians, filled with the experimental moments which are a key signature of his own experience within the organization.

This bouncy and festive mood was even pervasive of the transition between Anderson's Pocket Brass Band and trumpeter Paolo Fresu's Brass Bang—Anderson's final piece turned into a real, marching band occasion: both groups invaded the audience area, playing together and mixing with the joyful, hand-clapping public .

During the festival, Paolo Fresu's Sardinian roots were emotionally shaken by a sad event. On December 28, a group of 200 shepherds from his region were blocked by the police in Civitavecchia, while trying to reach Rome and share the hardship of their present situation with the Ministry of Agriculture. Fresu chose to dedicate his concert to those shepherds—and to all those who, like them, had to experience a Christmas time full of pain and sacrifice. 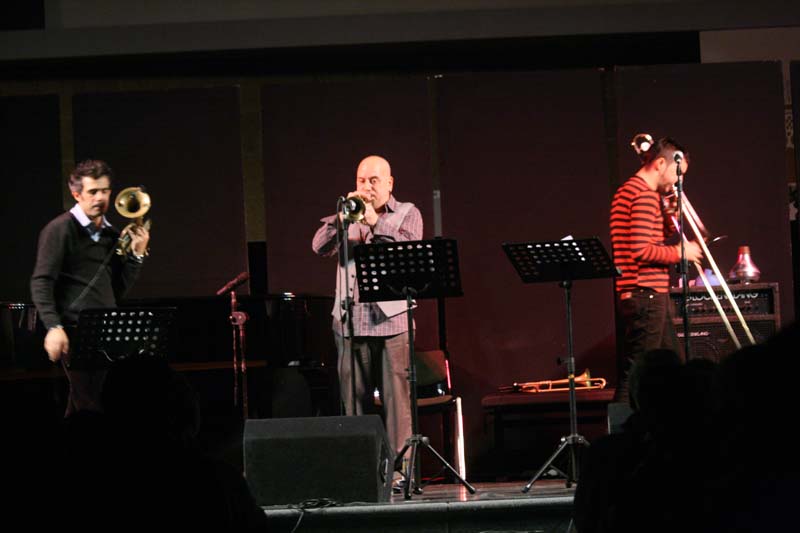 Paying respect to these workers, Brass Bang's intro to the late Lester Bowie's "Zero" displayed the brass instruments in a marvelous slow tempo, followed by Gianluca Petrella's masterfully elegiac trombone solo. In his version of the traditional "No Potmo Reposare," Fresu opted for an electronically reverbed sound on his tenor horn, while trumpeter Steven Bernstein's arrangement of The Rolling Stones' "As Tears Go By" followed, with syncopated, Mick Jagger-inspired, ironic imagery.

Bernstein's colorful suggestions were backed by Fresu, adding water to his trumpet; by Petrella, replying with a funnily childlike one-note raspberry; and by tubaist Oren Marshall, opening his own "Orange Ear" with a unique moment of breathlessly fast tuba phrasing, accompanied by a humorous dance. "Filippo Tommaso Marinetti lives," one would have liked to shout, together with Fred Buscaglione, whose romantic "Guarda che luna" was chosen as the band's encore, because, as Bernstein says, "rearranging one iconic piece of the country where you are playing is a question of style!" And people loved it.

Gospel at Its Best: The Selvy Singers

The Selvy Singers well know that gospel is not only made of vocals, but also of theatricality and of gestures which, in the church choir tradition, have to be shared with the audience. Theirs is not a performance; it is a ritual, and one aimed at praying in a happy way.

Which is why The Selvy's January performances—at both Palazzo del Popolo and in the monumental beauty of Orvieto's Dome—welcomed the new year with the group singing together during Sunday mass. They danced with brooms on "Sweeping Through the City," and mimicked shining rays with their hands on "This Little Light of Mine," inviting the enthusiastic audience to follow their gestures. Powerful voices—unafraid of loud, long-lasting notes—and joyful charisma were the keywords of their presence at Umbria Jazz Winter 2010.

Gatto's rhythmic skeleton is made of resistant, yet willingly small bones. He is a man of tiny details: he can be loud when he wants to, but mostly prefers to indulge in unexpected staccatos and sudden, poignant stresses to the whole arrangement. He is always present and recognizable, yet never imposing. This quintet is but one of his many projects as a leader: the latest, The Music Next Door (EmArcy, 2009), being one of those all-star formations within Italian jazz that can't help but produce some unexpected and savory surprises.

Gatto colored his tribute with some juicy anecdotes about Manne. As a result—and like Quintorigo's tribute to Mingus—the concert turned into a quick and humorous lesson on the history of jazz: for example, when Manne was asked to record "Fever," with Jimmy Bowen, the composer's score said, "play it like Shelly Manne." The producer got angry because—not knowing who he was talking to—Manne had not played, "like Manne"; the drummer had to tell him who he was, leaving Bowen speechless.

Dominated by a big band atmosphere, and heightened with the soft caliber of the saxophones' vibratos, it was easy to suddenly feel drawn into a Great Gatsby-like party. Danceable, lively arrangements followed the path traced by Zoot Sims and Gerry Mulligan in "Red Door," and by Duke Ellington in "Jump for Joy." The group also exploited the romantic potential of Billie Holiday's "I'm a Fool to Want You," its warm tonalities never succumbing to the threat of sugar-coated sentimentality.

While the magically intertwined saxophones and impeccable drums represented the leading, outgoing and smiley section of the band, Forbes still managed to stick out through his intimate, almost spiritual approach. This was particularly noticeable when married, together with Chuck Riggs' sensitive drumming, to Rosario Sportiello's elegant and soulful version of "Sunday."

Freely based on a short story written by Stefano Benni, One Hand Jack was a multimedia show featuring bassist Enzo Pietropaoli and pianist Julian Mazzariello, with narrators Elizabetta Spallaccia and Daniele Barcaroli; coordination and visuals by Massimo Achilli; and illustrations by Alessandro Marini.

The story, which mixed fairy tale, noir and bildungsroman, followed the adventures of a curious boy, Jack, who falls in love with the double-bass and manages to play it, and play it well, despite his lacking one arm. Live jazz and illustrations combined with refined delicacy, and repertoire videos from the 1930 and '40s contributed to a marvelous transition between scenes. It was the touching work of an ensemble of sensitive professionals, which would inspire any young child to choose an instrument and discover the magic of jazz (and music as a whole) within it.

Umbria Jazz Winter 2010 ended on the notes of an all-star concert, conceived to celebrate the best Italian jazz musicians of the year, according to the Musica Jazz magazine's poll. One of the most interesting prizes was that given to the best new talent of 2010—bassist Silvia Bolognesi, a sophisticated musician who chooses the unexpected as the core of her sound. Following the example of her mentor, William Parker, she will certainly continue leaving her audience in awe, as she did while opening the ceremony with electric violinist Stefano Pastor.

As with this talented new entry, the other prizes represented an exciting image of the state of the art of Italian jazz in 2010: an enthusiastic, colorful creature, with a wise soul—turning each project into the opportunity to poetically tame entropy through a series of improvisational spells.