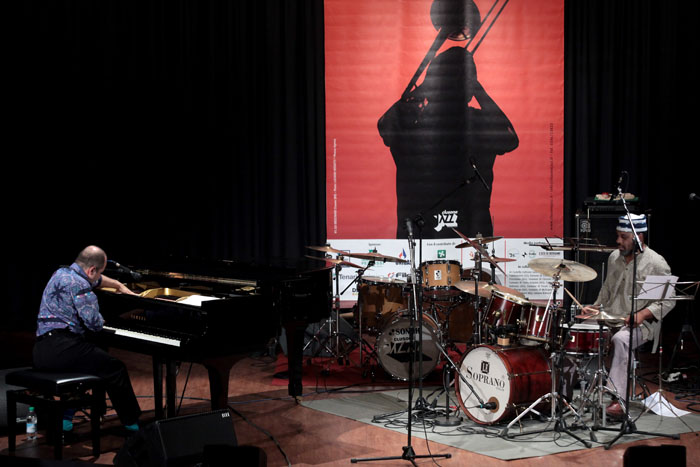 A premier performance by the piano-drum duo of Umberto Petrin and Pheeroan akLaff opened the first set on Saturday night at the 32nd annual Clusone Jazz Festival near Bergamo, Italy. Their music provided much more than the stereotypical first meeting of two musicians from different countries. The two demonstrated a high level of creative spontaneity, a genuine ability to listen and respond to each other, and enough synchronized connections to add a positive coherency to their interactive explorations.

Petrin is one of Europe's great modern pianists whose style is appreciated by both free jazz purists and less adventurous listeners alike. There are undeniable markings of Cecil Taylor in Petrin's playing (just to offer a global reference to style) but his original approach takes an entirely different form. Petrin's flexibility combines an exceptional classical technique combined with accomplished avant-garde rhythms and harmony, molded by a solid background in jazz. Not fearful of melody or time, yet with an ability to stretch both to challenging limits of chaos, Petrin's playing always rewards an attentive audience like those at Clusone Jazz Festival.

Pheeroan akLaff is a powerful drummer, and as engaging as any percussionist performing improvised and creative music today. His wealthy vocabulary that embraces many musical styles has allowed him to make significant contributions to recordings by artists such as Wadada Leo Smith, Oliver Lake, Henry Threadgill, Baikida Carroll, and Anthony Braxton. During the Clusone performance, akLaff laid down solid grooves, caressed delicate ballads with brushes, improvised melodies like a saxophonist, and provided supportive layers of free time, never canceling out the harmonics of Petrin's keyboard.

The first time Petrin and akLaff met was at the train station in Bergamo, when akLaaf arrived from Switzerland on Friday afternoon. They had a short rehearsal in the afternoon and a longer one Saturday morning which Petrin, with his dry humor later described as "an opportunity to explore themes and decide how not to play the tunes we selected."

The following is a "musical chronicle" of the duo's performance, a play-by-play description of their 40 minute set that included five compositions by Petrin and Thelonious Monk.

Petrin opened by playing low-register, repetitive motifs and variations with the left hand only, using the sustain pedal to allow the dark sounds to bleed into one another. AkLaaf's entrance came shortly afterwards with quiet, broken-time drum rolls on the floor tom and cymbal. Petrin continued improvising in the low register, alternating between motivic ideas, short runs and chordal clusters, all below middle C on the keyboard, gradually introducing one or two higher tones. Aklaaf, with rolling free time, increased the intensity and volume. Petrin responded with fierce jabs from his right hand while continuing the low-register left hand motifs.

Suddenly a majestic theme opened, which Umberto later identified as his originally titled "Interlude II." The melody was played briefly and without diminishing intensity, while a strong rhythmic motif sustained the suspenseful energy emitted by both players who brought the music to its peak volume.

In the next moment, Pheeroan akLaaf opened up across the entire drum kit, setting the bar of intensity and volume even higher, when just as suddenly, it all quieted down to near silence, a calm after the rhythmic storm turning into a delicate openness. Petrin quoted briefly from Monk's theme "Epistrophy" in his left hand (or was it "Straight No Chaser" w/ severe deconstruction?) AkLaaf, now on mallets, switched deftly between the padded ball and the end of the stick, back and forth like twirling a baton, varying the timbre of his sound and rhythm like any melodic instrument.

Seamlessly, a peaceful melody arose from Petrin which he later identified as an original tune entitled "Metal D." It was interrupted unexpectedly by dashing, darting lines, and back to near silence with soft, atonal mid-range clusters against a perfectly tonal melody in the right hand. Repeating this format several times, Petrin adeptly extracted melody from chaos while akLaaf focused solely on hit-hat and cymbals. Petrin initiated a rhythmic groove, playing a single-note riff with muted strings inside the piano. He alternated between the muted and open-string sounds to provide accompaniment for akLaff's drum solo, which consisted of very sparse, sharp attacks.

The drums dominated as Petrin accompanied with low-register sounds, punctuated by crisp mid-range chords and lightning-speed left-hand runs. Suddenly a cymbal crash indicated a coda. Repeated synchronized hits on piano and drums were followed by a lengthy, sustained frenzy between the two players, Petrin comping left-hand chords and soloing overtop, but favoring always the low end of the keyboard. There were four more synchronized hits and a long trill that faded out naturally. A little over fifteen minutes for the first tune. 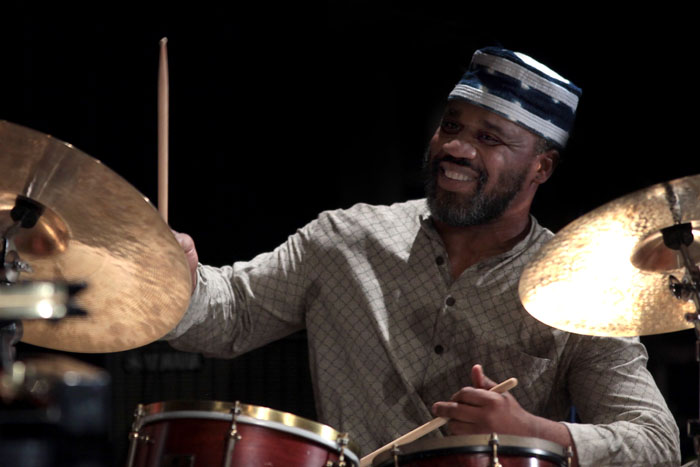 The second began as a solo piano ballad, Petrin playing broken arpeggios contrapuntally in both hands, while akLaaf contemplated with closed eyes in silent meditation for a while, before joining in with mallets. Slowly, this beautiful ballad revealed itself to be Thelonious Monk's " 'Round Midnight." Petrin played unusual but attractively disembodied harmonies, like something you might hear from pianists Borah Bergman or Ran Blake. AkLaaf switched to brushes and just as quickly altered the mood by playing several thundering bashes with sticks.

So went the first two "A" sections of the tune, changing to improvisation on the bridge, no longer following the structure of the harmony or melody. The improvised conversation ended by Petrin recognizably playing the last two measures of the bridge, in time, then playing single-note runs followed by harmonized fragments of the melody. AkLaaf conjured up dramatic change with a polyrythmic groove that caused the listener to hear two distinctly separate voices, as if piano and drums were playing two different tunes. The contrast worked beautifully.

Suddenly, more thundering hits from akLaaf turned into a funk groove, a moment of free improvisation, and a quick shift back to Petrin, who once again clearly defined Monk's harmony on the last two bars of the bridge. The last "A" section was played delicately in time while akLaaf dissolved imperceptibly into empty space, leaving the ending to solo piano.

The third piece featured another Monk composition, "San Francisco Holiday." After playing the melody, Petrin stood up and moved to the side and leaving the stage to akLaaf, who played a frenzied solo over a constant, hypnotic high-hat beat on 2 and 4, in the vein of Art Blakey. When Petrin re-entered, his percussive approach melded with the drummer's groove to make it swing like Monk.

The set ended at just over 35 minutes but not without an enthusiastic call for an encore. The two quickly returned and Petrin began slowly improvising thematic motifs from Monk's "Misterioso." Normally a B-flat blues, this version was seriously deconstructed. The original melody slowly took form, accelerating gradually into tempo with akLlaaf moving the pulse forward. Petrin's solo was a contrapuntal beauty as he shadowed a liberal interpretation of the melody in his left hand, using his right elbow for chords while improvising single-note lines with the fingers of the right hand. If Monk wrote a suite for J.S. Bach, it might sound like this. An excellent version and worthy of the name "Misterioso," akLaaf played to the beat of a different drummer again, offering another level of rhythmic counterpoint until both players united together in a perfect ending. 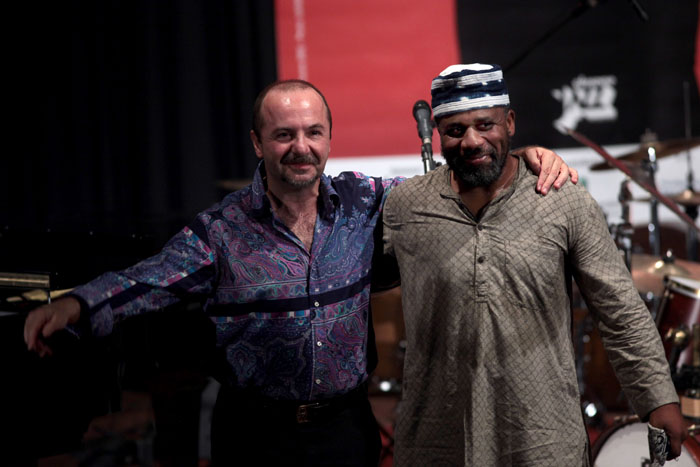 The Petrin-akLaaf duo is pairing of equals that demonstrates the spirit of creative music in a most convincing manner. Not that the performance was too short, but this concert was a good example of a set that you wish would have lasted longer.