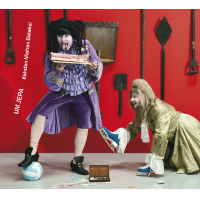 Buying a CD is more of an act of commitment nowadays than ever. One may be motivated by acquisitional zeal or by dedication to an artist, and opening up the wrapper brings one a little closer to the creative source regardless of any future pleasure from its consumption.

The cover in question is as surrealistically appealing as it is tantalizing, rather like the music on this first CD by the Finnish duo Kahden Miehen Galaksi/Two Man Galaxy. As the name implies, the artistic scope of two human minds is as endless as our concepts of space allow. Indeed, as the main keyed sound source of so much late twentieth century popular music, the range of the canvases that these Hammond organ tones can conjure up is galactic. Likewise the rhythmic capacity of drummer Joonas Riippa, as well as the depth of his box of additional percussive toys, seems to be an inverse relationship to his modest physical size.

Seppo Kantonen earned his laurels playing keyboards with Finnish meteor Pekka Pohjola, and for many years thereafter eschewed attempting his own compositions. Working with a swathe of Finnish rock and jazz musicians he developed his palette and versatility, but his compositional skills featured on this disc are very much a later creation. Pieces like "Sadicon" and even the opening "Um Jepa" (a play on the French expression for the inexplicable or unknowable 'je (ne sais) pas') develop longitudinally but then veer suddenly into unexpected tonic and rhythmic territory. Without a libretto this can be as baffling as the cover, where the two courtly clad musicians parade before an extensive collection of very rustic traditional shovels and spades!

In contrast to the richness of the artists' live interplay in concert, this music is somewhat two dimensional, limited by the bounds of the instrumentation and recording technology. But the richness of those Hammond sonorities guarantee that, as a source of wonder and possible inspiration, their canvas is infinite.