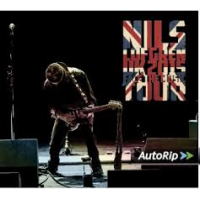 On the back cover of the UK 2015 Face the Music Tour CD, Nils Lofgren isn't outfitted in a much less colorful outfit than on his eponymous solo album of 1975. And that's reflective of the music inside which, appropriately enough for such a stripped-down duo approach, emphasizes the man's well-wrought material and an effervescent performing style.

But then Nils Lofgren has long radiated a persona that virtually defines panache and here that understated humble braggadocio, also in evidence on his unsentimental, natural between tune repartee, helps conjure a palpable dream-like quality to this collection of live performances from Lofgren's 2-15 tour of England.

Yet he doesn't opt for the obvious choices from a personal discography dating back to 1971; instead, Lofgren uses "Too Many Miles" as an opener to redirect expectations for a greatest hits show into anticipation of a set list that, including the late Crazy Horse guitarist Danny Whitten's "I Don't Wanna Talk About It," and Lofgren's own "Like Rain," presents discerning contemplation of the passage of time that's as exhilarating as often as it is heartrending.

Biting guitar notes rescue the closer, "Shine Silently," from sounding saccharine and , elsewhere, Lofgren's provocative musicianship, as well as that of Greg Varlotta playing multiple instruments like the frontman, enhances this personal statement. As on that aforementioned track, and a "Girl in Motion." the man's electric guitar playing tickles as much and often as it sears, while his piano work has a rough-hewn charm on Carole King's "Goin Back." The sweeping sound of acoustic guitar on "Rusty Gun" conjures lush textures that, in combination with (tongue-in-cheek?) trumpet belies this is just a pair of musicians.

As much as this album offers a good introduction to Nils Lofgren for the uninitiated, albeit not an obvious one, it also stands up as a means of rediscovery of his talents as a songwriter, singer and player, for long-standing fans who haven't necessarily followed his every step through the decades of his work with the band Grin, solo efforts and longstanding membership in Bruce Springsteen's band.

Too Many Miles; New Holes in Old Shoes; Lost A Number; Walkin' Nerve; Miss You "C"; Girl In Motion; I Don't Wanna Talk About It; Rusty Gun; Black Books; Goin' Back; The Sun Hasn't Set; Like Rain; Mud In Your Eye; No Mercy; Shine Silently.