By DAN MCCLENAGHAN
April 29, 2014
Sign in to view read count 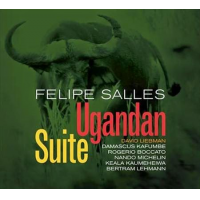 In 2008 saxophonist/composer Felipe Salles offered up the superb South American Suite (Curare Records). The highly rhythmic ode to his home continent seemed a natural for Salles, who hails originally from Sao Paulo, Brazil. He now moves his focus to the east, across the Atlantic for the gorgeous Ugandan Suite, a collection brimming with surging rhythms and fluid reed work.

The use of the "geographical suite" in jazz, going back to composer/band leader Duke Ellington with his suites for Far East, New Orleans, Latin American, might be seen as a effort to bring more gravitas and respect to the jazz genre as "America's classical music." And it does exactly that. Ellington's suites are his finest artistic works, and like Ellington, the Felipe Salles suites bite into a regional themes and roll with them, soak in the sounds of specific territories and bringing a jazz sensibility to them.

With the leader sharing front line with saxophonist Dave Liebman, the sound gleams with a sharp edge-these are two unfettered reed men. And featuring dense panoply of percussion the polyrhythms pop, rumble rattle with an orchestral momentum. Supported by a Whittington Fellowship Grant, Salles traveled to Uganda in 2011 to experience the music, the country's wildlife and to visit the major Universites of the East African nation. The result is a music drawn from Africa but conveyed through Salles South American heritage and American musical experience.

Each section of the five part suite features is named for one of Africa's native animals: "The Buffalo," "The Elephant," "The Leopard," "The Rhinocerous," "The Lion," etc. The Buffalo" features a bass drone beneath a floating flute. The rhythmic mix features Ugandan percussion instrumentation, the exotically (to American ears) named mpuunyi, ngali drums, inemba, and at least a dozen more throughout the disc. The sound stirs African tribal rhythms, Congolese rhumba, lilting Brazilian and Caribbean beats.

"Movement 2—The Elephant" opens with the frictional whine of an African fiddle, and features Salles on baritone sax alongside David Liebman's soprano sax. "Part 3—The Leopard," begins with a gorgeous piano solo by Nando Michelin, connecting African themes with Brazilian baiao, as the leading into Liebman's sinuous soprano sax lines followed by Sales tenor sax backed by adunga bow harpsplayed by Damascus Kafumbe.

Shape-shifting tunes, influences from all over the globe, superb musicianship, layered percussions, an inspired two reed front line rising up from those ebullient layerings, and an ensemble groove of the highest order makes Felipe Salles's Uganda Suite one of the year's highlights.

Movement 1--The Buffalo; Movement 2--The Elephant; Movement 3--The Leopard; Movement 4--The Rhinoceros; Movement 5--The Lion.