By EYAL HAREUVENI
February 27, 2014
Sign in to view read count 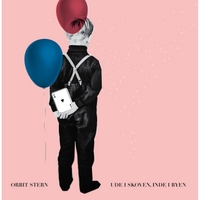 Orbit Stern is the duo of Swedish, Copenhagen-based guitarist Samuel Hällkvist (known from his association with King Crimson members in his band Variety of Loud), and Danish drummer Frederik Hauch (who played in many local alternative rock bands). Both nursed a longtime affinity for an Appalachian twang but decided to take this mythic, relatively strictly defined genre and transform it into futuristic, multi-layered sonic textures, as if the Wild West banjo players and square dancers just retired from a tour with the latter incarnation of King Crimson and moved to the countryside outskirts of post-modern Denmark after a short trip to Mars.

On its debut Ude i Skoven, Inde i Byen ("In the the Woods, Out in the City" in Danish) the duo uses a range of effects—synthetic beats, futuristic sounding keyboards, guitar Frippetronics and many more—in order to articulate fresh and rich sounds that will charge the worn-out country playing modes with exotic, expanding sounds.

Orbit Stern succeeds in re-contextualizing the typical twangy guitar sounds and jumping 4 pulse beats, liberating this musical legacy from its cultural, social and political baggage. The duo dresses it with updated, fashionable yet foreign dresses. The duo even introducing new beats to the uplifting, driving pieces that almost turn these pieces into a bizarre fusion of futuristic disco-country dances as on the upbeat "Langsom Jagt" and "Osiris Rex."

The masculine pathos of the old-time country songs is processed sonically and becomes subtle, almost feminine on "Stilstand I Vand." "Helt Inde I Skoven Er Der Også Lys" and "Lys På Vejen" take the melancholic motive of loneliness, reflected in the beautiful resonating guitar of Hällkvist and offers a distant, even ironic, perspective on this theme.