By DOUG COLLETTE
October 4, 2014
Sign in to view read count 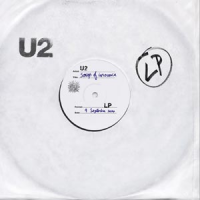 To accurately assess and analyze the music of U2's Songs of Innocence, it's necessary to exert a herculean effort to shunt aside issues that would otherwise camouflage a clarity of mind. It's been at least eighteen months or more that the new U2 album was supposedly imminent, so the rise and fall of expectation and anticipation leads away from, rather than closer to, a discerning eye and ear. And the recent controversy arising from the auto-appearance of the album as a digital file in iTunes (and in some cases on wireless devices themselves, also without notice) can only diminish the band in eyes of potential fans as well as those dyed in the wool aficionados.

So, while it's often dangerous to compare the early and latter-day work of a band with some history, this approach helps to clear away the aforementioned psychic clutter, especially as the band cranks up on "The Miracle" to open the album. U2's four-way chemistry rescued No Line on the Horizon (Island,2004) from being merely a production job and invested the stripped down All that You Can't Leave Behind (Island, 2000) with humanity otherwise missing from the group's public profile; so it is here as Songs of Innocence begins, then continues on "Song for Someone," which sounds streamlined and fluid rather than borderline mechanical as is "California (There Is No End to Love)."

"Iris (Hold Me Close)" sounds like an outtake from The Joshua Tree (Island, 1987)-and for all we know it is-but the fact is the quartet sound like they're feeling it as The Edge flicks at his guitar while drummer Larry Mullen Jr. and bassist Adam Clayton generate tension under the unself-conscious rise and fall of Bono's singing. At the risk of indulging in hyperbole, what's miraculous about Songs of Innocence is that, by and large, it doesn't sound overworked (except perhaps in the sonic vacuum of its audio mix), despite the length of time U2's worked on its recordings, combined with the multiple producer's credits on various tracks (the renaissance producer/musician Danger Mouse the most common denominator in that regard).

Repetitive as it is, "Volcano" does hearken to the dislocated Eighties milieu against which U2's declarations of faith and independence stood in such stark relief and "Raised by Wolves" continues in that vein, the vivid imagery of its lyrics depicting the despair of squalor leading to the pained admission "I don't believe anymore!..." But the bell-like clarity of the piano notes that end the track, as drums and bass echo away, sound like nothing so much as a reminder of the warmth of security, especially as it leads into the crunching guitar intro to "Cedarwood Road."

Hard though it is to believe, there's a palpable undercurrent of credible humility pervading this record, U2's struggle with their persona quite likely the source of its otherwise disingenuous title. And "Sleep Like A Baby Tonight," with a gently reassuring vocal played off against gigantic guitar chords that blow away the whispering keyboards, reaffirms that theme as much as the black and white cover graphics. As the group marches through "This is Where You Can Reach Me Now," they make a telling statement, in their most sonorous harmonies: "We're taking the path of most resistance/The only way for us to go..."

In a similarly purposeful vein, albeit a personal one, the insinuating likes of the concluding cut, "The Troubles," with a slithering bass figure, female vocals that alternately taunt and tempt, and strings that come and go like shadow play, sounds like nothing so much as honest introspection turned autobiography, of which anyone outside U2 might not believe they're capable. Yet, like the bulk of Songs of Innocence, it works.

The Miracle (of Joey Ramone), Every Breaking Wave, California (There Is No End to Love), Song for Someone, Iris (Hold Me Close), Volcano, Raised by Wolves, Cedarwood Road, Sleep Like a Baby Tonight, This Is Where You Can Reach Me Now, The Troubles.