U2: Songs of Experience: Deluxe Edition

By DOUG COLLETTE
February 10, 2018
Sign in to view read count 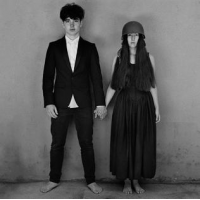 It's perfectly fitting so many of the song titles on U2's Songs of Experience sound like self-help aphorisms (at worst) or quick excerpts from an individual's inner dialogue (at best). "Love Is Bigger Than Anything In Its Way" and "You're The Best Thing About Me," to name just two, are parceled over the course of a baker's dozen tracks, the sequence of which at large plays off against a search for personal identity against a newsreel of current events.

More to the point of the album's title, the mega-successful group's newest work is the sound of a band searching for sense of itself within its history—and not just its immediate predecessor, Songs of Innocence (Interscope, 2014)—and also in relation to the outside world. Ergo, the inevitable likes of "Get Out of Your Own Way" and "The Little Things That Give You Away" appear prominently, with the only track here that hearkens directly to 'classic' U2.

It's to the great credit of this mega-successful band it doesn't rely on its trademarks through the course of its fourteenth album. But to paraphrase one of U2's most famous tunes, the group "'still hasn't found what it's looking for," at least in terms of novel sounds that both supplant the readily identifiable style it honed some thirty years ago and still sound like a logical extension of same. There's no doubting that, as with the previous album, the foursome continues a concerted effort to identify sonic expression to correspond with its nuanced sentiment(s)—why else enlist nine producers?—but the band fails to purposefully home in on a single approach or unify a selected variety. As a result of the insularity that comes with the group's celebrity—as in "Lights of Home"—remains purely symbolic rather than a vivid account of real comfort and sustenance.

It's telling that while Bono and guitarist The Edge are aligned together in the gate-fold photo of this digi-pak (appropriately flanked by drummer Larry Mullen and bassist Adam Clayton), their respective voices are no longer of equal prominence within U2. Inside one of the two enclosed booklets, the vocalist goes to great lengths to explicate these songs for which he wrote the lyrics, while his long-time partner takes the opposite tack in arrangements: for instance, on "Love Is All We Have Left," those immediately recognizable rhythm guitar chords of his don't appear at all. The man's instrument is the backbone of "Red Flag Day," but it sounds generic, like he who wields it is trying valiantly not to sound like he used to.

"The Blackout," however, will perk up the ears with its familiar tones, an effect magnified by contrast with the aforementioned pair of cuts. Bono's declaration "Nothing to stop this being the best day ever," hardly sounds hollow coming from a man who admitted to a brush with his own mortality three years ago, but there's still a somewhat detached air to his pronouncement, understandable for sure but still at odds with the grinding rhythm section and gritty guitar that form the foundation of the performance. The other three members of the group sound like they're working (and not wholly successfully) to shore him up, instrumentally, psychically and emotionally. It's an illustration of how difficult it can be for artists who've reached such highly-elevated plateaus of success to sound credibly vulnerable.

Likewise, while "13 (There Is a Light)" directly hearkens to one of the Songs of Innocence, namely "Song for Someone," it confirms Songs of Experience is most definitely not its counterpart. In fact, the seventeen-track 'Deluxe Edition' is confounding rather than clarifying, further suggesting this latest U2 record might better have been posited as the first in a series by which the group reinvents itself. In contrast to the five extra cuts issued with the prior album, clocking in at forty-five minutes, the four here running roughly a third as long are only slightly enlightening, their sum effect neither reaffirming nor redeeming the primary set, as did the varied B-sides of singles from The Joshua Tree (Island, 1987). And, in the context of this vaguely defined work, these "bonuses" suggest a less prolific output this time around, particularly when production names reappear alongside the additional credit: Steve Lillywhite, who stood at the helmed of their earlier studio albums including War (Island, 1983).

"Ordinary Love (Extraordinary Mix)" belies its subtitle and while "Book of Your Heart" begins promisingly, particularly in the wide-screen audio realm, it eventually shrinks into vacuum-sealed compression. The 'St. Peter's String Version' of "Lights of Home" unfortunately inflates the song's sentiment to the point of bursting from its own self-importance: more taut orchestration would've sufficed. Meanwhile, this alternate mix of "You're The Best Thing About Me" lives up to the 'U2 vs Kygo' subtitle because the band, in particular lyricist Bono, attempts to communicate in heartfelt fashion, a laudable intent undermined by generic production.

In the end, Songs of Experience may live up its title, at least to the point of its original intent. But U2 here falls short in making the statement implicit in every other album they've released since 2000. When the foursome are making music together, they transcend an image often scarred by adverse publicity. Forget "American Soul. " Bono, The Edge, Mullen and Clayton, Jr. need to find their collective center of gravity again. There are more than enough hints on this record that they do indeed retain the capacity to recapture the spirit of The Unforgettable Fire (Island, 1984) and All That You Can't Leave Behind (Interscope, 2000), but these recordings sound like just early and all too tentative steps in that admirable pursuit.

Love Is All We Have Left; Lights of Home; You're the Best Thing About Me; Get Out of Your Own Way; American Soul; Summer of Love; Red Flag Day; The Showman (Little More Better); The Little Things That Give You Away; Landlady; The Blackout; Love Is Bigger Than Anything in Its Way; 13 (There Is a Light); Ordinary Love; (Extraordinary Mix); Book of Your Heart; Lights of Home (St Peter's String Version), You're the Best Thing About Me (U2 vs. Kygo).