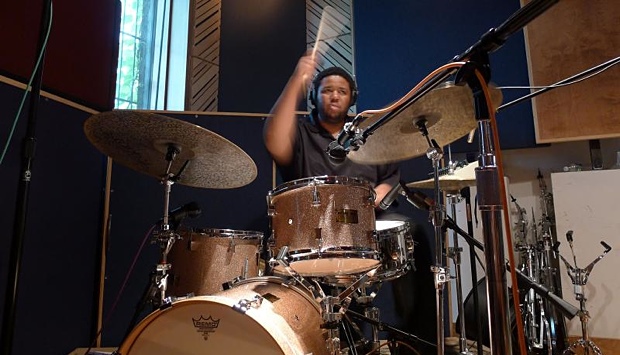 I don't really like to judge anything as good or bad, because I won't learn from it if I start judging it right away. That can be for later, but when you're making music in the moment, you have to sort go with the flow, no matter how good or bad.

Though Tyshawn Sorey's Oblique-I (Pi Recordings, 2011) is his most recent release to date, it's actually comprised of some of the percussionist/composer's earliest work. Containing music that is sonically dense, enormously challenging and (as the title suggests) consistently blurs and obscures the lines drawn between improvisation and composition, it has been hailed by critics and fans alike as a combination of what has come to be expected from Sorey: a masterful drummer and visionary, and unique composer. The story, however, goes much deeper than a simple culmination of elements. There is a reason that the lowest number in the numerically titled arrangement of compositions on the album is "Eight"; The Oblique songbook represents a turning point for Sorey as a musician and a person.

"I had a conversation with [saxophonist] Anthony Braxton about how to begin a body of work that I actually believe in," recalled Sorey, "because I had thought, 'Well, who cares? I'm just a drummer and I'll be playing in so-called jazz bands and that's all I'm going to be doing and nobody's going to be playing my music' and at that time, I had written six or seven more 'jazzy' sounding tunes that I didn't care for at all, because they weren't reflective of what I was hearing or experiencing."

Sorey's dialogue with Braxton would continue in his time at Wesleyan University, where Sorey studied compositional approaches not only with the famously iconoclastic Braxton, but also American experimentalist Alvin Lucier, as well as jazz vibraphonist Jay Hoggard. During and after his undergraduate studies at William Paterson University, Sorey had become increasingly interested in composition, specifically non-traditional compositional forms. "We did this recording called Child Real Eyes (2002) with Andre Vida, who's another student of Anthony [Braxton]'s. When we did his recording, we were talking about composition mostly. It was really exciting, because he saw that I was interested in the composers he was also checking out at the time, like Karlheinz Stockhausen and John Cage and people like that. I was about 21 when I had this conversation. I told Anthony 'who cares?' and at William Paterson, I was at a point where I was integrating things compositionally like new music and odd meters and dodecaphonic things."

It was at this point that Braxton gave Sorey a sound piece of advice. "I had given up on the idea of being a composer and Braxton said, 'Well, you should keep writing your music, because there's somebody out there who will believe in your work, whether or not it's somebody you want to believe in it. There's going to always be people out there who will want to do your music. Just write a book of music that you believe. You don't want to pander compositionally; you want to do what you do.'" This goaded Sorey almost instantaneously to write what would be the Oblique songbook also referred to as "41 Compositions." This compendium of compositions represented a change in approach to composing music for improvisers, one that requires a highly sensitive musical awareness on the part of the musicians involved. 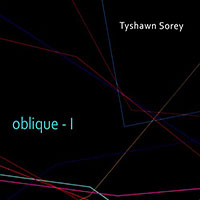 "Starting from composition no. 7, the music took this approach where there weren't just a lot of dodecaphonic elements but also a lot of rhythmic counterpoint," explained Sorey. "Also, it caused a lot of problems, just in terms of ensemble playing. What's happening in the music, no one really is together in much of it. For example, bass and piano don't play at the same time at a certain point. There's a lot of layering going on in terms of where the pulse is felt and even I don't really play with what everybody else has necessarily. The melodic phrasing on top makes it feel like there's almost no time at all, as do the piano and bass part. It almost feels like everything is in ¼. You can't really say that it's in a set meter or here's the downbeat of so and so. When you're listening to it without the score in hand, you can't really tell where everything is and that was really fascinating to me. It no longer was about the idea of counting as a listener. I get this response at almost every concert I do where if I count off a tune as '1,2,3,4' that's the only thing that sounds familiar and they'll ask, 'Was that tune in 4?' [laughs]."

Sorey's prolific understanding of compositional devices and the amalgam of influences that have crafted his composerly presence has shown through in both performing contexts with groups like Fieldwork and Paradoxical Frog and within the spectrum of concert music like Roulette and the International Contemporary Ensemble. Sorey has, to date, composed 160 works and is now private instructor of composition and improvisation at the New School for Jazz and Contemporary Music. However, Sorey's other most accomplished skill, perhaps the one that has gained him the most notoriety within the jazz and improvised music world, has also been something of a detriment to work as a composer. The idea of drummer-as-composer is neither paradoxical nor is it particularly new, but Sorey still finds it to be a false conundrum that continues to permeate itself. 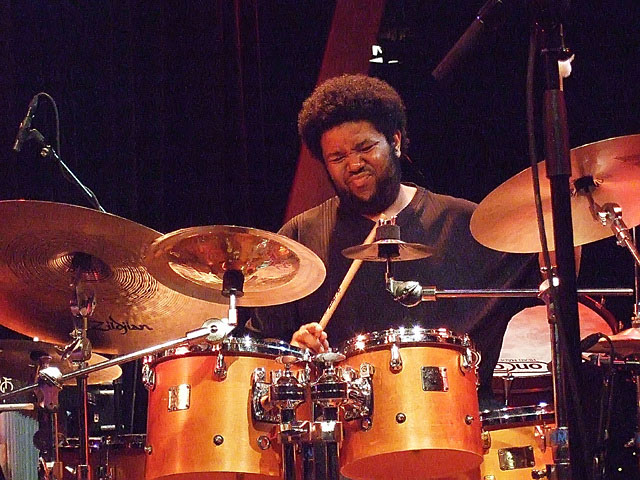 "The whole thing with being pigeonholed as a drummer, right away I'm not supposed to be a composer. I'm not supposed to know about music theory. We hear the classic 'three musicians and a drummer' joke. I think it's not cool at all but fortunately there are a growing number of drummers who are composers, especially in New York who have produced very good work over the last ten years or so. I still feel that the 'drummer as composer' has never really had any respect, whether or not it's so-called jazz or not, that's not even important. What he or she will write is frowned upon."

Sorey does not feel that this has just affected him, either; he points to several other drummer friends and colleagues with the same issue. "You still don't hear about somebody like Gerald Cleaver, who has a breadth of compositions in his own name, playing his own music in Europe or New York the same way people he plays with are known for. The same thing goes for somebody like Kendrick Scott, who you don't about playing his own compositions except in New York. Same thing goes for me. I was asking a friend of mine 'How did we go from playing Zebulon twice a month to twice a year?' I understand what is happening on practical level, with the closing of venues, but it limits the overall output as to what people get to hear. Even Paul Motian was a great composer and now only since he passed away do we get to hear about his compositional work. While I might not have the resources to do something like this now, I think the [Dave Douglas's] Festival of New Trumpet Music is an excellent model to follow, because they've been going on now for at least 10 years and there needs to be a similar things for drummers and percussionists. There needs to be something that puts the drummer as composer on the map, because there's too much of it to not have it be represented correctly."

It only speaks to Sorey's depth as a musical figure that his career as a drummer could stand formidably without the presence of his compositional work. He has worked in diverse musical languages with luminaries like Muhal Richard Abrams, Steve Coleman, Dave Douglas, Tim Berne and countless others. Sorey's drumming has come to encompass hundreds of musical assets, paying vital attention to qualities like space, texture, polyrhythmic complexity and sound organization. Interestingly enough, Sorey's first musical endeavors were not the drums alone. Very much like his current standing in the musical world, Sorey's formative years had him soaking up assorted musical idioms. 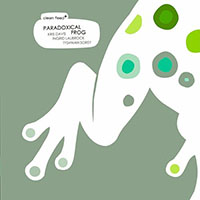 Sorey recalls some of his earliest musical influences by way of television. "When I was a kid, it was watching music videos. We don't think of music videos the same way we do now as we did in the '80s. I mean before MTV, when it was actually video footage of bands performing. My dad and I would sit down and watch those. I would gravitate towards the music and also the drummers a lot of the time. I also watched the piano players and even the horn sections sometimes. I started getting into watching reruns of things like The Ed Sullivan Show and Flip Wilson, where you'd see actual bands performing and there was all kinds of music: jazz, rock, R&B, pop, etc. This all led to me getting interested in music through the church, messing around on their piano and picking up the church songs by ear. I also had a little keyboard at home and I would play those songs the exact same way. At that time, it was mostly by ear. I was also beating around on a lot of pots and pans, too."

As time progressed, Sorey gained the idea that he might want to be a musician, but he thought of it more as a hobby than anything else. When Sorey was about eight, he started to take trombone lessons, which became one of the first instruments he gained proficiency in. "This guy Fields Howard was the first to show me the ropes, which ultimately led me to become a student of the Newark Community School of the Arts. That wasn't too far where I was going to school at the time. I was there on scholarship and I got mostly classical lessons, just basic trombone lessons and learning how to read music. That's what I did every Saturday for few years, and then it got to where I was going twice a week because I really liked it." 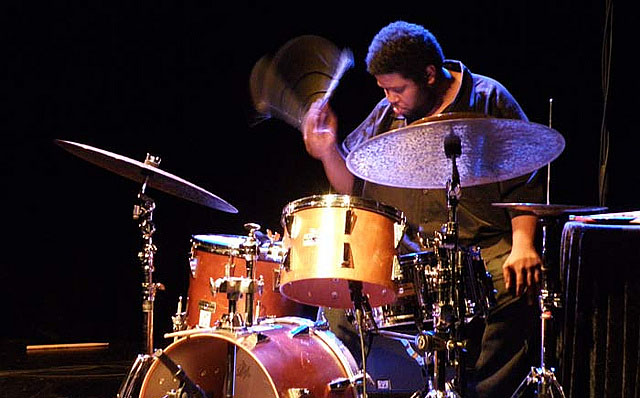 Sorey's first shot at the drum set came by way of Newark musician and educator Michael Cupolo. "I was around 13 or 14 and he was the instrumental music instructor and I was bugging him forever to play on his drum set and he wouldn't let me play. Eventually, by December, I just bugged him so much he said 'Alright look, take this key, take out the drum kit, and knock yourself out.' And that's what I did for most of my time there, just played on the drums. I didn't really know how to set it up, I just put it together intuitively, but I didn't really know about the intricacies of the height or angles of the drums. I just adjusted myself to that."