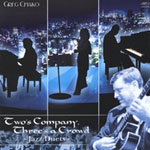 Having lived and worked in Singapore and Japan, guitarist/composer/entrepreneur Greg Chako takes this occasion to provide us with a series of duets with vocalist Andrea Hopkins and pianists Hiroshi Tanaka and Homei Matsumoto. When Chako arrived in Japan in 2004, he found a steady guitar/piano duo gig at the famed Imperial Hotel—the first time he worked without a bassist. Chako dubbed the ensemble "The Imperial Duo." On this recording he adds several vocals provided by the Atlanta-based Andrea Hopkins. Chako met the singer on one of these "bass-less" events and was impressed with her flexibility and stage presence.

Two's Company, Three's A Crowd offers a rewarding experience for afficionados of the piano/guitar duet setting, and listeners should prepare themselves for a lengthy stretch, inasmuch as these sixteen tunes take up some 75 minutes. Both of the pianists acquit themselves quite well, but the guitar is the primary instrument featured on most of these tracks.

The theme of Henry Mancini's opening tune, "The Days of Wine and Roses," is, however, stated by Matsumoto. When Chako steps forward for his solo, he employs the Wes Montgomery octave-style approach in a most facile fashion. I did not hear this technique on Chako's concurrent release, Where We Find Ourselves. Likewise, on the Kosma/Mercer standard "Autumn Leaves," Matsumoto takes the melody line and cleverly emulates the late 1950s Bill Evans trio's arrangement of the tune.

The album consists of a number of romantic and intimate ballads like Bruno Martino's "Estate" and Robinson/Burdge's "Portrait of Jenny," where the guitar weaves the lyrical melody with gently flowing single-line solos. The eight vocal pieces with Andrea Hopkins (named by Chako as the "Smooth As Silk" duo) are a diversion and occupy almost half of the album. It is refreshing to hear Hopkins' take on such tunes as Charles Trenet's "I Wish You Love" or her soulful version of David Gates' rock ballad "If"—but, while the singer provides to be more than up to the task, these pieces seem to detract from the guitar/piano chemistry. Half of these vocals could have easily been eliminated.

Track Listing: The Days Of Wine And Roses; I Could Write A Book; Estate; Almost Like Being In Love; Portrait of Jenny; Mean To Me; Some Other Spring; I Wish You Love; Autumn Leaves; In My Solitude; You're My Everything; If; Who Can I Turn To?; So Many Stars; Time After Time; Take The "A" Train.