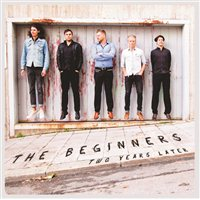 The band's name is a typical piece of shy Swedish understatement. Its two leaders, guitarist Erik Söderlind and saxophonist Andreas Gidlund, are anything but beginners; they have a great deal of experience on the local jazz scene.

Söderlind has attracted attention for his collaborations with veteran keyboards player Kjell Öhman and his studio work. Gidlund led soul singer Jennifer Brown's backing band and has played with the likes of guitarist Ulf Wakenius and saxophonist Scott Hamilton. Neither can pianist Martin Sjöstedt be labelled a novice, having accompanied such names as saxophonist Joe Lovano, trumpeter Randy Breckerand composer/arranger Jim McNeely, not to mention singers Rigmor Gustafsson and Viktoria Tolstoy.

The album marks the second anniversary of the day Söderlind and Gidlund met and decided to put together a band. They recruited a rhythm section and began to meet regularly for practice sessions in a cellar in the Skanstull area of Stockholm.

All the numbers are originals. There are five by Gidlund and four by Söderlind: all straight ahead, post-bop, riff-based jazz, nothing too way out.

Proceedings kick off with Gidlund's up-tempo "Skanstull Serenade," featuring some fine guitar from Söderlind. He plays in the Wes Montgomery/George Benson tradition, but now that he's escaped from the guitar/Hammond organ formula of his previous recordings, his own personality starts to come to the fore.

Although influenced by John Coltrane, Gidlund avoids the tenor icon's experimental excess, notably on "Waltz for Maggie," which also features a meaty solo by Sjöstedt, before bassist Kristian Lind is given a chance to shine—but doesn't.

"Fyra" ("four" in Swedish) is by Söderlind and, with drummer Chris Montgomery prominent throughout, recalls the heyday of drummer Art Blakey and the The Jazz Messengers. "Soda's Dream" is bluesy, with an excellent bass solo by Lind, far more interesting than his previous effort.

"Södermalm Runt" is Gidlund's tribute to Stockholm's once working class south island which has moved rapidly up-market in recent years. The Beginners' theme song, also written by him, ends inconclusively during a Sjöstedt solo.

Then there's "Deux Ans Après," the short but lyrical title song, for some reason. in French. A more exact translation would be "Deux Ans Plus Tard." Gidlund winds things up with some breathy blowing reminiscent of the late, great Ben Webster.

An excellent album and one that puts paid to the myth that melancholia is a necessary ingredient of Nordic jazz.