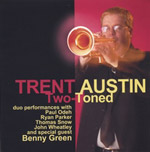 This program of duos by Boston-based trumpeter Trent Austin places the artists in an intimate setting where every nuance takes center stage. As guitarist Jon Wheatley and each of four pianists interpret two songs apiece with Austin, you can feel the personal voice of his horn making significant, convincing statements.

Austin growls, glides and stutters for effect, and he soars high when a different emphasis seems appropriate. This session isn't about showing off his powerful technique, which could have been the case. No, instead, Austin has constructed the program for his second recording with intimacy, storytelling and interpersonal communication on his mind.

The duo format allows musicians to express without clutter. Two artists get to have their say, and we're treated to a baring of souls. However, this kind of performance requires that both musical partners prove themselves creative. No problem there, either. Through each selection, Austin squeezes out his message clearly with several surprises, while his Two-Toned partners follow suit.

What Is This Thing Called Love provides the best scenario on the program, as Austin's open trumpet soars high in an adventurous foray. Pianist Thomas Snow walks a suitable accompaniment and colors this interpretation with unique harmonic layers. Surprises lay around every corner as the pair explores the familiar Cole Porter classic with a creative bent.

Clark Terry's "Jones lets the trumpeter get into a blues mood as he and pianist Ryan Parker walk a classic stroll down "comfortable lane. A crisp interpretation of Chick Corea's "Armando's Rhumba zigzags eloquently; Austin and pianist Snow execute swirling phrases in unison and in parallel. They work this piece like a seasoned veteran dance team on the polished wood floor.

Charlie Parker's "Stupendous, a contrafact for "S'Wonderful, allows plenty of room for the trumpet/guitar duo to swing mellifluously; both artists reach back to swing roots and sizzling bop textures. Austin plays valve trombone on "Two-Toned, which strikes a casual chord in its simplicity and comfortable swing disposition. His session brings variety and a sense of adventure into focus as he works in the duo format to express from a highly personal point of view.

Lullaby of the Leaves; I