By GENO THACKARA
October 20, 2017
Sign in to view read count
If there's one thing listeners and fans associate most with John Wetton, it's that voice. That's not to dismiss his roles as bassist and songwriter, however, which were also reasons his presence in U.K., Asia and early-1970s King Crimson had such an impact in the world of rock, progressive and otherwise. Since his passing in January 2017, the late singer's estate has had a busy year continuing the work of releasing and re-releasing some goodies from the vault that he intended but sadly didn't get to complete. 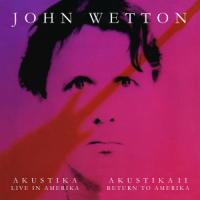 Akustika (Self Produced, 1996) was the kind of curio that made a small but interesting splash in the mid-'90s, back when it was quite a novelty for artists to start websites and directly sell their own official bootlegs. Such things are tossed out as commonly as candy mints these days, but Wetton's low-key outing remains worth another look for those interested in hearing him in a simple setting with almost no trimmings. This expanded pressing is remastered and joined by another similarly mostly-unplugged show recorded almost a decade later in 2005.

Back-catalogue nuggets such as "Thirty Years" or "Only Time Will Tell" show a sometimes-unexpected depth without the slick production and arena-ready grandeur they might have had before, and the singer gets to use his rich baritone in ways that wouldn't work so well in front of a rock band. Expanding it with the previously-unreleased volume II definitely makes a significant benefit to the package; the longer setlist and Wetton's warm between-song chatter make the being-there feel that much more tangible on the newly-released show. King Crimson's "Starless" doesn't really work when the piece is severely abridged and robbed of its tension, but the likes of "The Night Watch" and "Voice of America" unfold in the simple format just fine.

The title is belied by a smidge of background synth and ringing guitar tone, though the affair fundamentally stays just as basic and straightforward as advertised. While he occasionally goes overboard belting out a line too loudly, and (let's say) reaches for some high notes more successfully than others, those human imperfections still give the delivery a certain emotional power in the moment. These simple performances won't shake the world, but Wetton's other bands had already done that in their own ways. Akustika is more about enjoying the slow glow that lingers afterwards. 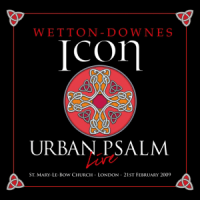 Small limited releases were naturally easier and more common by 2009, but some things ended up as limited souvenirs nonetheless. In February of that year, iCon (a project co-run by Wetton and his former Asia-mate Geoff Downes) celebrated its third studio album with a show filmed for video in a London church and mainly distributed directly to the fans who'd been present that night. This wider legacy pressing also includes the audio on CD with three extra songs.

The duo is backed by Dave Kilminster's guitar and Pete Riley on drums, restoring the energy of golden-years Asia with all the bombastic keyboards an old-school prog-pop devotee could want. It often gives the feeling of a synth-heavy time warp back to 1987—and sometimes earlier, as they go all the way back to Downes' debut with the Buggles—though Wetton's more seasoned voice also shows the wear of the decades in between in positive ways. Touches of cello and Anne-Marie Helder's lovely voice harmonies help by adding organic tones in some important places.

It seems to have been a magical night for those who were there, and the performers fervently tear into the obvious hits as much as the more obscure rarities. From iCon's latest prog anthems to a "Heat of the Moment" that refreshingly keeps the acoustic slow-ballad treatment intact, it's a greatest-hits-and-more set that spans two extensive careers while keeping old and new equally alive. The dedicated fan could hardly ask for more.

Tracks: Countdown to Zero; Go; I've Come to Take You Home; Twice the Man I Was; Elstree; Voice of America; The Die Is Cast; To Catch a Thief; Starless; Paradox/Let Me Go; Raven; True Colours; Heat of the Moment; Rubicon; Don't Go Out Tonight; My Own Time; Days Like These; In the End; Rock and Roll Dream.