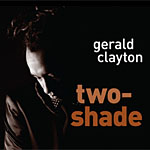 Gerald Clayton isn't like the average young jazz musician. He was immersed in music studies for a long time (his teachers include Kenny Barron, Billy Childs and Shelly Berg), while gaining experience playing duo piano concerts with Barron, Benny Green and Mulgrew Miller and also performing as a sideman with the legendary Clark Terry. If that's not enough, he has recorded more than once with the Clayton Brothers (co-led by father John and uncle Jeff) and contributed as pianist and arranger on vocalist Melissa Morgan's excellent debut CD.

The pianist is only in his mid-20s, though he shows both a tremendous maturity in his approach to his instrument and a wide-range of musical interests on this trio date with bassist Joe Sanders and drummer Justin Brown. His treatment of Cole Porter's "All of You" incorporates several brief-but-tantalizing musical detours, rather than approaching it in typically straight-ahead fashion. Clayton's lyrical introduction to "Con Alma" is simply masterful.

The remainder of the disc consists of the leader's thoughtful originals. The spry, funky "Boogablues" is full of humor, while the ballad "Peace For the Moment" is a multi-faceted work that resists being pigeonholed into any one style. He does throw in a few surprises, like the brief interludes with electronic voicings simulating wordless vocals in "Casiotone Pothole" and group vocals for a moment in the soulful "Two Heads One Pillow" (though neither of them are mentioned in the CD's credits). "Scrimmage" proves to be an irresistible up-tempo post-bop vehicle that finds the trio at its very best. With Two-Shade, Gerald Clayton reveals himself to be one of the potential jazz greats of his generation.

Track Listing: Boogablues; Trapped In Dream; Two Heads One Pillow; Peace For The Moment; All of You; Interlude-Love All Around; Casiotone Pothole; One Two You; Sunny Day Go; Scrimmage; Interlude-You're Out; Con Alma.