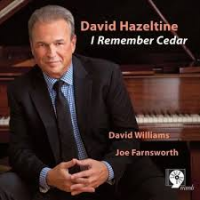 Years ago, I often went to a club in which a guest soloist was coupled with the house rhythm section. At one point in nearly every opening set, in an effort to find some common ground, the leader called Cedar Walton's "Bolivia." Sitting and waiting in anticipation for the theme to be played became an important part of witnessing each performance. Regardless of who was on the bandstand, "Bolivia" never failed to bring out the best in everyone.

It was inevitable that Walton, who passed away in 2013, would immediately take his place in the pantheon of fallen jazz musicians to whom attention must continue to be paid. A couple of recent tributes include pianist David Hazeltine's compact disc, I Remember Cedar (Sharp Nine Records, released in November of 2014), and the Second Annual Salute to Cedar Walton by tenor saxophonist Mike Kaplan's Nonet at Trumpets Jazz Club in Montclair, NJ, on December 28, 2014. Hazeltine—whose trio includes former Walton sidemen, bassist David Williams and drummer Joe Farnsworth—and Kaplan aren't peddling nostalgia or reproducing the master's music in familiar or particularly comfortable ways. Deftly balancing the past and the present, both Hazeltine and Kaplan fuse Walton's compositions and their own unique capabilities.

In a program of nine Walton originals plus a solo version of the standard "Over The Rainbow" (once a staple of Walton's live performances), Hazeltine is at the height of his considerable powers. A trio has been the setting of some the pianist's finest recordings in an extensive discography as a leader, including two The Classic Trio sides (Sharp Nine Records), Modern Standards (Sharp Nine Records), and Perambulation (Criss Cross). On I Remember Cedar Hazeltine's interpretations of the heads of Walton's "Simple Pleasure" and "Cedar's Blues" are brisk, efficient and deep, the latter track containing broad, slightly dissonant chords that ring out like church bells on a Sunday morning.

Throughout the recording, Hazeltine makes it clear that the music is a shared enterprise by playing in ways that leave ample space for Williams' and Farnsworth's significant contributions. The overall effect is the antithesis of some contemporary jazz in which everyone clamors to be heard and insists on making an immediate impact. In a manner befitting longtime colleagues, the trio's interaction entails mutual respect, patience, as well as the desire to push one other to greater heights. For instance, during the head of "Fiesta Espanol," Farnsworth partially forsakes a strict timekeeping role in favor of busy, precise sticking that buttresses the melody.

Regardless of the tune, tempo, or rhythmic feel, each of Hazeltine's solos unfold in a coherent narrative. His medium weight touch on the instrument makes each note sound clean and distinct. Throughout middling tempo cuts like "Martha's Prize" and "Clockwise," there is continuity and an element of surprise in the ways which protracted single note lines and chordal passages sound like extensions of one another. Hazeltine remains grounded and stress free on the up tempo tracks "Simple Pleasure" and "Turquoise Twice," even while pulling together a lot of ideas at a rapid clip.

Mike Kaplan is the ideal person to present a live performance tribute to Walton's music. Outgoing and affable, Kaplan easily drew the audience at Trumpets into his orbit even before the first note sounded. While on a mission to expose laypersons and musicians to Walton's works beyond the few that are customarily played, he acted as a genial master of ceremonies without any hint of pedantry. Carefully avoiding the terminology of music theory, in between selections Kaplan judiciously offered tidbits of information surrounding Walton's music, such as the year (or period of Walton's career) in which a tune was written, and where to find recorded versions of the compositions. There were no takers when he asked the audience to "Stop me anytime I'm giving too much Cedar trivia."

Apart from Kaplan's stagecraft, the thirteen selections of Walton's music were impressive and thoroughly enjoyable on a number of levels. The arrangements by the leader, trombonist—and Grammy nominee—Pete McGuinness ("Midnight Waltz"), bassist Mike Karn ("Clockwise"), baritone saxophonist Ed Xiques ("Ugetsu"), and saxophonist Bob Hanlon ("Head and Shoulders") were filled with unexpected, arresting details, and stayed true to the character of Walton's material. Kaplan didn't feel compelled to employ the entire band on every selection. In the middle of the evening's first set, "Rainy Night" featured only special guest trumpeter Vinnie Cutro and the rhythm section.

Most of the arrangements entailed written material and improvisations in nearly equal proportions. Solos were usually two or three choruses, just enough space for the musicians to make an impact while they dealt with the background figures or lines devised by the arrangers. Shout choruses, different combinations of instruments playing Walton's melodies (in part or whole), as well as other devices created diverse sounds that never broke the holistic spirit of each selection. For his arrangement of "Plexus," Kaplan called a solo order presumably with the contrast of instruments and individual styles in mind, featuring the busy, high note sorties of trumpeters Rob Henke and Cutro, followed by Karn's comparatively deliberate, low toned bass improvisation.

It's heartening to see Hazeltine and Kaplan, distinguished composers in their own right, take time out from other projects and put a great deal of thought and ingenuity into paying homage to Walton. Their efforts are rousing successes, in part, because the principals acknowledge the depth of Walton's influence, and then allow their own visions and personalities to come to the fore.