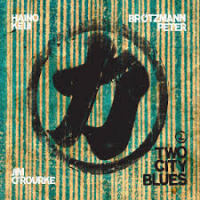 The music of legendary jazz saxophonist Peter Brötzmann is at its finest when the great man has something to push against. Typically these performances find him collaborating with drummers like Hamid Drake, Paal Nilssen-Love, Steve Noble, or Nasheet Waits. The music is built upon a power-versus-power formula. The drummer bloodies his nose, and he's off—throwing roundhouse punches and haymakers.

It's something altogether different, and just the same here, where he is in the company of two guitarists, Jim O'Rourke and Keiji Haino. Recorded in 2010 at Tokyo's Pitt Inn, two nights are represented with the LP Two City Blues (Trost, 2015) and the CD Two City Blues 2 (Trost, 2015).

While this appears to be the first recorded collaboration with O'Rourke, Haino and Brotzmann have a long and significant history, releasing Evolving Blush Or Driving Original Sin (PSF, 1996), Shadows (DIW, 2000) with drummer Shoji Hano, and the monstrous 3-CD Fushitsusha outing Nothing Changes No One Can Change Anything, I Am Ever-Changing Only You Can Change Yourself (Utech, 2014).

The one-two of O'Rourke and Haino give these two discs their rich color. The pair jostle and joust around picked notes, slurred pedal steel guitar. Brotzmann is game to go a-hunting here, as he holds back, back until the pair of guitars decides to cut themselves free. Once they spark off, the energy cannot be held back on the LP. The two sides traverse the heights of energy like two fighters (in this case three) with wobbly knees leaning on each other in the 10th round.

"Two City Blues Two" gives us the tour-de-force of this collaboration. The 49-minute title track meshes the O'Rourke's blues slide guitar, Haino's traditional Japanese three-string shamisen, and the blues-soused saxophone of Brotzmann. Haino adds his tormented vocals as O'Rourke fires his Sonny Sharrock-like machine gun guitar. The piece journeys through hills of energy and valleys of placid dreams. Noise energy intrudes and exits and a prayer-like grace hovers, before the blues returns and Brotzmann's urgency spurs on the affair. Ethnomusicologists could make a career sorting this one out.