By ROBERT SPENCER
June 1, 1998
Sign in to view read count 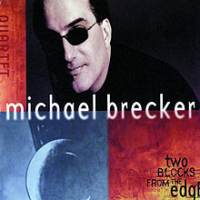 Two Blocks from the Edge is one of Michael Brecker's most impressive efforts. His tenor saxophone playing is at a peak of power and virtuosity. His band (pianist Joey Calderazzo, bassist James Genus, drummer Jeff "Tain" Watts and percussionist Don Alias) stays with him every step of the way. Two Blocks from the Edge is an example of contemporary jazz at its best: it isn't a pallid rehash of the archives, but it isn't tuneless and forbidding either.

Of course, there are echoes. Brecker thanks John Coltrane, Joe Henderson, Sonny Rollins, Wayne Shorter, and Stanley Turrentine in the liner notes. That about sums it up, but the overall feel and arrangements here hark back to Pharoah Sanders' Journey to the One : accessible jazz tunes just tinged with a pop feel and played with passion and power. Brecker doesn't sound much like Pharoah, but they're mining similar territory. Pharoah's ghost appears on "El Ni'o," which is tricked out with an ostinato rhythm backing while Brecker wails away at his most Coltraneian ' and veers into Pharoahnic multiphonics at the climax.

Brecker is, of course, his own man, and an deservedly influential voice in his own right. Check out the title tune, "Two Blocks from the Edge." Brecker alternates between full-bore high-energy passages and quiet moments of spontaneous and clich'-free lyricism. This tour de force is a marvelous example of the man's mastery of his instrument, but it is only one highlight of this album. The more relaxed and bouncy "Bye George" and the dusky ballad "Cat's Cradle" display Brecker's emotional versatility.

"The Impaler" may refer to the tricky harmonics of the tune, which of course Brecker navigates with confidence. "How Long 'Til the Sun" is tasty, leading into a long unaccompanied intro to "Delta City Blues." Brecker's wailing tenor recalls the best of the honking blues tenors, and he carries the pulse with Rollinsian precision, bringing a close to one of his best efforts.