By BRUCE LINDSAY
February 15, 2012
Sign in to view read count 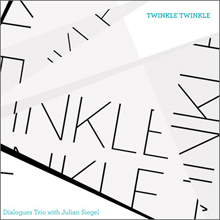 Pianist Bruno Heinen formed Dialogues Trio in 2005 with bassist Andrea Di Biase and drummer Jon Scott. The trio has played numerous live concerts in Italy and the UK since its inception, but the three players have also been involved in other projects—including Heinen's work with Palestinian singer Reem Kelani, Di Biase's membership in trumpeter Kenny Wheeler Trio and Scott's activities with the Kairos 4tet. Seven years after the band's formation, Twinkle Twinkle is its debut recording: ten tunes inspired by one well-established children's rhyme.

"Twinkle twinkle little star" is one of the most immediately recognizable opening lines: a phrase repeated thousands of times every day by parents and children around the globe. The album sleeve doesn't quote the nursery rhyme lyric however, preferring instead to reference Lewis Carroll's version, featuring the tea-tray impersonating little bat. A good move, because Carroll's somewhat surreal take on the children's favorite is a much closer relation to Dialogues Trio's musical re-imaginings.

Heinen grabs most of the composer credits, with five tunes; Di Biase contributes the romantic "Thick Thin"; and four tracks are credited to the band. The inspirational nursery rhyme makes regular appearances in the tunes, at times overtly, at others in much subtler ways.

"Waltz for Rossie" kicks off at a more upbeat pace than its title suggests, but calms down as the "twinkle twinkle" motif becomes obvious. "Spins Wins" teases with just its first three notes—"twinkle twin"—of the refrain. It also marks the first appearance of Julian Siegel, weaving long, sinewy, lines on bass clarinet. The dreamlike "Venus" is darker, mostly due to Scott's slightly menacing drums. Heinen's "Jumping Rocks" opens with the clearest exposition of the "twinkle twinkle" refrain, courtesy of Di Biase's confident, rich, bass. Heinen and Scott skip and jump around the repeated phrase, creating complex and engaging patterns.

Playing "Spot the Twinkle" is an enjoyable way to spend a few hours, but it's far better to let the refrain reach out and grab the attention from time to time as just one aspect of the music. Twinkle Twinkle is filled with delightful melodies and exquisite playing. The music doesn't simply shine like a star, it flies, darts and swoops like a little bat. And it's all the better for it.