By GLENN ASTARITA
December 17, 2013
Sign in to view read count 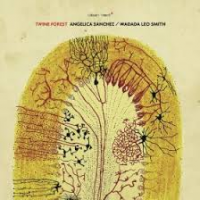 Legendary trumpeter, educator Wadada Leo Smith is a very active neo- jazz iconoclast with appearances as a guest artist and co-leader or when producing critically acclaimed albums such as his resplendent civil rights opus Ten Freedom Summers (2012, Cuneiform Records). Partnering with nascent jazz pianist Angelica Sanchez—a member of Smith's Golden Quartet and Organic bands— signals an intriguing proposition. With the trumpeter's bronze-toned proclamations and paramount sense of authority, Sanchez is at times nestled in a supporting role as she effectively comps, shadows and shades his strapping choruses while also supplying the rhythmic impetus.

Linked with an occasional breathy rasp, Smith propels a kaleidoscopic array of emotive sentiment as Sanchez excels as a sublime catalyst. And as a whole, the production contains an undulating string of ebbs and flows. Even though these works are premised on varying concentrations of structure, the duo shifts the tide while casting ethereal interludes into the mix, partly initiated by Sanchez' faint manipulations of the piano strings.

On "Echolocation," they render a quaintly mutated panorama of stops and starts, as if they're recycling mini-motifs on the fly. Here, Smith's probing choruses are gingerly supported by Sanchez' succinct and ever-so-gentle notes with imagery paralleling impressions of the still of night. Yet "In The Falls of...," the musicians formulate a smoky, albeit abstract ballad that instills a quivering thematic foray lying somewhere between argumentative digressions and yearning sensibilities.

While Sanchez is a budding stylist in jazz and improvisation circles, Twine Forest imparts a reaction—and perhaps justifiably so—that this pairing rings more like a student- teacher showcase. Regardless of whatever the initial gameplan was, the musicians communicate a rock-solid bond amid a reciprocal appreciation of each other's distinct artistry.