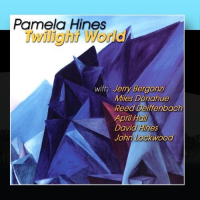 Bergonzi's a journeyman player who knows his way around a tenor as well as anyone working today. No one uses the entire range of the horn better than he does, and it's always a pleasure to hear the way he works through a solo. It had better be a pleasure on Twilight World , because Bergonzi sounds like the leader on this session. He, not Hines, states the themes, explores them at length on his solos, and provides the tags that finish things up—Hines comps very well during these proceedings, but Bergonzi is driving this car.

It's not as if Hines is not a participant in her relegation to mere accompanist, because the arrangements simply do not feature her. The central musical focus is usually elsewhere. Hines' one composition here, the lovely "Traces, is a showcase not for Hines, but for vocalist April Hall, with some smoky tenor from Bergonzi (Hines solos as well, but here, as on the rest of the album, Gonz gets lots more choruses). Bergonzi's tunes "Red's Blues and the boppish "Outhouse are scorching tenor duels between Bergonzi and guest saxophonist Miles Donahue. "Windprint, another Bergonzi contribution, is essentially a blowing vehicle for—that's right, Bergonzi. Even on Hines mentor Marian McPartland's gorgeous piano vehicle "Twilight World, it's Bergonzi who carries the tune. This album's leader is hiding.

Let's not avoid the whole truth just to make a case, however. Hines comps marvelously throughout the session, and her solos are all fine, particularly on Paquito D'Rivera's "Guataca City, where she swings exquisitely and buoyantly over David Hines' hot, rubbery fretless and Deiffenbach's shimmering cymbal work (her independent-left-hand comping often evokes Horace Silver, but in this Latin context the Silver really sparkles). One also suspects the album's Latin-heavy song selection reflects Hines' own tastes as well. One simply wants to hear more of her; there are already many Jerry Bergonzi albums.

The music on Twilight World is good. There simply isn't enough of the group's alleged leader. Let's hope that next time Pamela Hines steps forward in a more egotistical musical context where she hedges no bets and either succeeds or fails, in full view—otherwise, why record and release albums?