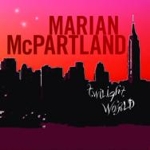 Jazz icon Marian McPartland turned 90 years young in March, 2008, and the special occasion produced an all-star party at Dizzy's Club in New York. National Public Radio has made some of the performance available online as part of the legendary pianist's weekly radio series Piano Jazz, an institution since 1979. As if 2008 couldn't be more productive for McPartland, she also recorded a new trio set for Concord, Twilight World. Joined by Gary Mazzaroppi (bass) and Glenn Davis (drums), McPartland delivers a low-key, slightly melancholy program, which is to be expected from a woman her age. That shouldn't suggest she can't still swing, however, which she certainly demonstrates with nimble renditions of "How Deep is the Ocean?" and "Afternoon in Paris."

Cooled-out ballads permeate the set. Highlights include the title track, which faintly recalls "On Green Dolphin Street," as well as McPartland's dreamy, solo rendition of Burt Bacharach's "Alfie." At this point, the album might seem to be "Jazz for Sleepy Time," but the pianist then throws a curve ball in the form of a couple of Ornette Coleman covers. Whoa. Who knew this lady could still serve up 'modal pie'? "Turn Around" starts out accessibly enough, but soon turns into a syncopated, atonal exploration once the theme has been stated. There's hardly a theme to be found in "Lonely Woman," which features some nice interplay between the pianist and Mazzaroppi, who recalls Mingus at his feistiest.

With this album, McPartland earns her "years young" description—this in no way serves an excuse to say "Oh, look...she can still play, but let me seek out her older stuff to catch her in her prime." On the contrary, she sounds like she's there right now. Twilight World offers both beautiful and challenging music, proving that McPartland's dedication to her craft (along with her uncanny talent) has kept her at the top of her game.

Twilight World; The Days Of Love; Turn Around; Close Enough For Love; How Deep Is The Ocean; Alfie; Lonely Woman; Blue In Green; Afternoon In Paris; Stranger In A Dream; Blackberry Winter.