Odin's Court: Turtles All The Way Down 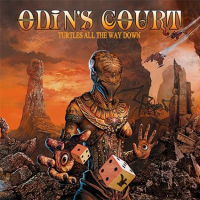 Many progressive metal and progressive rock musicians center their thematic underpinnings on interstellar space, Armageddon or social degradation, among other heavy topics. On its 5th release, Maryland-based Odin's Court presents a concept album, relating to a multilateral viewpoint of the universe and a quest for knowledge. Casting similar frameworks undertaken by well-known prog bands such as Dream Theater and Kings X, this unit morphs instances of full throttle metal escapades with melodic overtures. But Odin's Court differentiates its musical persona by not solely operating within the fast lane since many of these comps are engineered with medium tempo grooves along with guitarists' Matt Brookins and Rick Pierpont tasteful soloing jaunts and streaming sustain licks.

Lead vocalist Demetrius LaFavors' emphatic delivery rides above the scorching riffs and weighty crunch chords. With compositions such as "The Depths of Reason," Brookins—also performing on keyboards —fuses a curvy synth line into a regal theme as the band marches forward amid one segment that is reminiscent of Black Sabbath guitarist Tony Iommi's droning death metal parts. But LaFavors' drives home the melodic hook, augmented by the soloists engaging interplay and potent line of attack.

There are a few upbeat acoustic-electric ballads, yet "Box of Dice (Does God Play?)" is a rousing and extended finale as the band toggles though a multi-part suite type oeuvre, broadcasting anthem-like choruses and sonorous mini-motifs as they put matters into overdrive with a trajectory towards the heavens. And while it's a commendable effort, there are certain areas that are a tad superfluous via some paradigm shifts and disjointed time changes that don't add much value to a given piece.